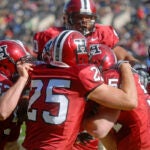 The National Soccer Coaches Association of America (NSCAA) has named forward Andre Akpan ’10 — co-captain of the Harvard men’s soccer team — to the 2009 Missouri Athletic Club’s Hermann Trophy Watch List. Considered the highest individual honor in intercollegiate soccer, the recipients of the Hermann Trophy are selected by Division I head coaches who are current members of the NSCAA.

As this year’s only Ivy League selection, the Grand Prairie, Texas, native is coming off a season in which his 26 points led the Ivy League, and his 10 goals and six assists were both tied for second-best in the league.

The Crimson return seven starters this season and will open the 2009 season at home against Stony Brook on Friday (Sept. 4) at 4 p.m.