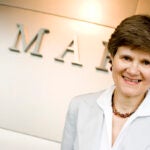 Harvard researchers are building a celestial time machine that lets astronomers look back at hundreds of thousands of objects in the Earth’s skies over the past century.

The effort aims to digitize 525,000 glass photographic plates taken at observing sites around the world between the 1880s and the 1980s. The collection, the largest such in the world, contains a treasure trove of largely unexamined data, according to Paine Professor of Practical Astronomy Jonathan Grindlay, who is leading the digitizing effort.

Grindlay said each of the plates has been examined for one or a few objects of interest to specific astronomers. When one considers that each plate holds images of upwards of 100,000 objects and that each visible object has been photographed between 50 and 3,000 times over the years, the potential knowledge about the changing universe hidden in the Harvard College Observatory plate stacks is enormous.

“DASCH will look at every object on the plate with specially developed software and measure its brightness. You can not know what you’re looking for and still find something,” Grindlay said. “We’re part of a wave that is looking at the sky for its variable objects, for everything that goes bump in the night — and that turns out to be a lot. DASCH will open a new window for time domain astronomy.”

The digitizing effort, called DASCH for Digital Access to a Sky Century @ Harvard, got under way in 2004 when it received funding from the National Science Foundation. After two years spent on the development of a custom-made scanner for the plates and an initial version of the scanning software, the first scans began in 2006. Since then, work has focused on crafting software to make sense of the enormous amount of data the plates hold.

Though just 1 percent of the collection has been scanned so far, the effort is already bearing scientific fruit. Grindlay said that literally thousands of new “variables” — objects that change in brightness over time — have been discovered and three scientific papers describing new findings are in the works.

“It’s been a rich start so far,” Grindlay said.

Sumin Tang, a doctoral student of Grindlay’s, has been working on the project for nearly three years. For the first two, Tang worked on the software to analyze the data, but for the past year, she has been doing the analysis itself. She’s found several thousand variable objects, among them several dozen long-term variables that she calls “very special.”

One, Tang said, has become fainter over 90 years and may be a giant star that is giving off material that obscures its light. Another object tracked over a century dropped sharply in luminosity and then became brighter again.

“These variables are hard to find in other data sets because their time scale is so long,” Tang said. “This Harvard plate collection is unique.”
Pickering’s project

The plate collection is the result of an effort begun in the 1880s by Harvard College Observatory Director Edward C. Pickering. Pickering understood the potential of photography as a way to not only collect astronomical data, but to freeze a moment of time for celestial positions and brightnesses and preserve it for future astronomers.

Under Pickering’s leadership, astronomers began photographing the skies over the observatory in Cambridge and, later, in Harvard, Massachusetts. They also set up field stations around the world, including Peru, and later in South Africa and New Zealand. Those Southern Hemisphere sites looked at skies that were largely unstudied at the time. With up to hourlong exposures, researchers could take 20 images in a night, then painstakingly pack and ship the fragile glass plates back to Cambridge.

The plates were scanned for bodies that changed in luminosity. While astronomers of the day understood that binary stars eclipsing each other could cause variations in luminosity, they didn’t understand the extremes of stellar variability, novae, or supernovae.

“In the 1880s, nobody was surveying the sky in any systematic way, let alone looking for variables,” Grindlay said. “They had the foresight to be interested in these variables, even though the physics of them wouldn’t begin to be understood until the 1920s and 30s.”

The photography continued uninterrupted through the late 1980s except for a decade in the 1950s, when budget concerns led to a suspension of activities.

The result is the world’s largest collection of astronomical plates showing a vast array of stars, nebulae, and distant galaxies. Most of the plates are 8 inches by 10 inches in size and coated with a photographic emulsion on one side. Several thousand are larger – there are 25,000 14-by-17 plates — and just over 2,000 more are circular. Slipped into envelopes marked by handwritten notes about their contents, the plates sit in row after row of green metal cabinets that take up three floors in a specially constructed building at the Harvard College Observatory, part of the Harvard-Smithsonian Center for Astrophysics.

The building was specifically designed to support the plates’ weight — 170 tons — and to protect them from earthquakes, according to Curator of Plate Stacks Alison Doane. The three floors where the stacks are located are braced by metal supports every few feet. The supports sit on the foundation and stand independent of the building’s walls. Despite the plates’ significant weight, the building was actually built to hold about twice as many as are stored there now, Doane said.
An idea waiting for its time

Grindlay first conceived of digitizing the plates in the late 1980s as computers and digital imaging were supplanting traditional photographic observing. Grindlay understood then the potential of applying computer technology to the information contained in the plates, both in accessibility and in analytic power. He also knew the plates contained too much data — he estimates 1.5 petabytes — to be handled by the technology at the time.

“It took about 20 minutes to realize the technology was not there,” Grindlay said. “Every year that goes by it gets easier to store [large amounts of data].”

That changed in recent years. Grindlay said that in 2003, he realized that technology had advanced to the point where scanning and digitizing the plate collection was possible. Grindlay, with help from Doane, and a retired engineer named Bob Simcoe, applied for a grant from the National Science Foundation and DASCH was born.

Though they’ve scanned more than 5,500 plates so far, the project is still in its development phase, Grindlay said. The first years were spent designing and building a scanner capable of both handling the plates physically and detecting the slight differences in luminosity that are important clues to astronomers. Grindlay praised Simcoe’s work designing the custom-built scanner and that of Ed Los, who began as a volunteer and has since come on staff as a scanner software expert.

The scanner table is magnetically driven — it has no gears — and can handle two plates at a time. It is designed to measure the position of an exposure with an accuracy finer than a micron. The plates are scanned in a dark room and lit from below with a series of flashes from red LEDs. The scanner takes 60 overlapping images of each plate, captured through a fixed lens and high-speed charge-coupled device, or CCD, camera positioned above. The images are then stitched together with software. The whole process takes only 90 seconds for two plates.

The DASCH software not only captures a digital image of the plate, it also assigns a numerical value to the brightness and position of each distinct object in the image — information that can later be crunched by software. It can detect variations in brightness down to changes between 5 percent and 10 percent, Grindlay said.

As important as the plates themselves are the handwritten records of how each was taken. This meta-data, as Grindlay referred to it, is held in 1,200 logbooks kept at the observatory. The logbooks are also being digitized as part of DASCH. A dedicated DASCH volunteer, George Champine, recorded 80,000 photographs of the book pages so they could be sent to the American Museum of Natural History, where a team of volunteers is entering the information into a database by hand.

Grindlay said there’s still a lot of work to be done. The group is working to create a digital interface — likely a Web site with access to the massive database — to make the information held in the plates freely available to scholars around the world.

The biggest hurdle remaining, Grindlay said, is the scanning itself. Though the group scans perhaps 160 plates a week, DASCH is searching for funding that will allow them to really ramp up the process. The machine was designed to scan as many as 400 plates a day — a rate that would see the entire collection scanned within a few years.

“The whole idea is to get this incredible treasure trove online so astronomers and the public alike can get at it,” Grindlay said.