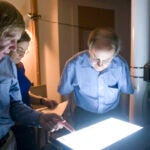 Highest such honor bestowed by U. S. government

The announcement came today from the White House.

Fryer has also served as the chief equality officer for the New York City Public Schools since 2007. Through his work, Fryer has focused on race, inequality, and education through a data-driven, economic lens. He has demonstrated how tension increases with education, along with potential for social and geographic mobility, among individuals in poor and segregated communities. He has also illustrated the ways that in some communities, educational underinvestment can signify peer acceptance, while academic success, or behaviors that might lead to higher pay or professional status, can lead to rejection from the group.

At Harvard, Fryer has been an associate director of the W.E.B. Du Bois Institute for African and African American Research, a faculty associate for the Institute for Quantitative Social Science, and a faculty research fellow for the National Bureau of Economic Research.

His award was sponsored by the National Science Foundation.

Patrick J. Wolfe, associate professor of electrical engineering on the Gordon McKay Endowment at the Harvard School of Engineering and Applied Sciences (SEAS):

Prior to founding the Statistics and Information Sciences Laboratory at Harvard in 2004, Wolfe held a fellowship and college lectureship jointly in engineering and computer science at the University of Cambridge. He has also taught in the Department of Statistical Science at University College, London, and continues to act as a consultant to the professional audio community.

In addition to his diverse teaching activities, Wolfe has published in the literatures of engineering, computer science, and statistics, and has received honors from the Acoustical Society of America and the International Society for Bayesian Analysis. His research group focuses on statistical signal processing and its application to tasks involving modern high-dimensional data sets, in particular sounds, images, and networks.

His award was sponsored by the Department of Defense.

Wood received a B.S. in electrical engineering from Syracuse University and completed his M.S. (2001) and Ph.D. (2004) degrees in the Department of Electrical Engineering and Computer Sciences at the University of California, Berkeley. He was a postdoctoral researcher in Berkeley’s Biomimetic Milli-Systems Lab for one year before joining the faculty at Harvard. While at Berkeley, he invented a novel process for rapidly creating sub-millimeter to centimeter scale articulated, actuated, and rigid micromechanical structures. He has demonstrated both flying and ambulatory microrobot prototypes created using this paradigm.

At Harvard, he founded the Harvard Microrobotics Lab and has demonstrated the world’s first robotic insect capable of generating sufficient thrust to takeoff. His current research interests involve the creation of biologically inspired aerial and ambulatory microrobots, minimal control of under-actuated nonholonomic nonlinear dynamical systems, and decentralized control of multi-agent systems. He is the winner of a 2008 NSF CAREER award, a 2008 ONR Young Investigator Program award, and multiple best paper/video awards.

His award was sponsored by the Department of Defense.

Lesaux received a B.A. from Mount Allison University in 1999, and an M.A. (2001) and Ph.D. (2003) from the University of British Columbia. Her areas of expertise include bilingual education, child development, learning disorders, psychology, and reading development.

She leads a research program that focuses on the reading development and difficulties of children from linguistically diverse backgrounds; her developmental and instructional research has implications for practitioners, researchers, and policymakers. Her research has focused on the reading development and the health and well-being of children who are at risk for learning difficulties, including children from language-minority and low socioeconomic backgrounds, and children with language impairments. Lesaux’s program of research is supported by research grants from several organizations, including the National Institute for Child Health and Human Development, William T. Grant Foundation, William and Flora Hewlett Foundation, and the Spencer Foundation.

From 2004 to 2006, Lesaux was senior research associate of the National Literacy Panel on Language Minority Youth and contributing author to three chapters in that national report. In the spring of 2007, Lesaux was named one of five WT Grant scholars, earning a $350,000 five-year award from the WT Grant Foundation in support of her research on English-language learners in urban public schools. Lesaux is a member of the Society for the Scientific Study of Reading, International Academy for Research in Learning Disabilities, and Society for Research in Child Development. She is also a member of the Reading First Advisory Committee for the Secretary of Education, U.S. Department of Education.

Her award was sponsored by the Department of Education.