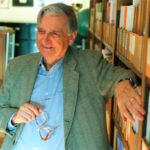 Budding young scholars met with one of the University’s top scholars to learn about the finer points of academic research, the field of history, and what it’s like to be the president of Harvard.

In an informal discussion Faust explained how she did much of her research for her Civil War tome, “This Republic of Suffering: Death and the American Civil War.” The work, she said, involved travel to library archives around the country and countless hours poring over letters, manuscripts, diaries, and poems, searching for new insights about the past.

“It has always been for me a kind of time travel. … I try to remove myself from the present and really get inside the heads of people in the past,” she said.

Faust, Lincoln Professor of History, is a historian of the Civil War and the American South; she has written six books, including “Mothers of Invention: Women of the Slaveholding South.”

The University’s president also revealed her personal connection to the field of history, noting that growing up in Virginia during the Civil Rights era helped inspire in her an interest in the history of the South. The same issues of race, equality, and citizenship addressed by the Civil War, said Faust, were “very live issues” for her.

“It was a time of tremendous change in Virginia society, a time when segregation was beginning to break down,” she said.

Founded in 2004, the CSA offers students the opportunity to study and experience college during the summer months over the course of three years. The academy is aimed at helping prepare talented, low-income students from the surrounding area for a selective four-year college or university after graduation from high school.

Sira Fati, who loves debate and is considering studying the law, said her experience with the CSA “has been amazing.”

“I was surprised by the sense of community between everybody here,” she said, adding that she enjoys “getting to experience what dorm life might be like in college.”

A junior this fall at Cambridge Rindge and Latin, Fati said she liked Faust’s approachable style. “She was very open to answering all of our questions and she seemed happy to talk to us.”

Shawnna Thomas was pleasantly surprised to learn that the University’s 28th president is a woman. “It’s really funny, because of the mindset that I have … and the name, I thought it was a man,” said the 16-year-old Boston Latin Academy student from Dorchester, who described having a woman as president of Harvard “cool.”

Thomas said her favorite thing about the CSA program, aside from studying cryptology in her quantitative reasoning class, is the people. “I feel like I have a second family here.”

Throughout the program, students from Boston and Cambridge high schools live on the Harvard campus and engage in an intense academic curriculum that involves group instruction conducted by a variety of experienced teachers, as well as a speaker series featuring Harvard scholars. The program also offers mentoring relationships with Harvard undergraduates that continue throughout the academic year, as well as full financial support. Participants who successfully complete the program receive a $3,000 scholarship for use at a college or university of their choice.

The program has 57 graduates currently in college, including five at Harvard and two who are set to attend the University this fall.

“Thanks to Harvard and the commitment it has made, we have a real track record of being able to help these students achieve what they deserve to achieve, which is ascending to the country’s best colleges and universities,” said CSA Director Maxine Rodburg.

After the discussion, 15-year-old Regal Sealy, who attends the Academy of the Pacific Rim in Hyde Park, said he was thankful Faust took the time to meet with them and admitted to being a little nervous when asking the University’s president a question about the Civil War.

“I was worried about messing up,” he said with a laugh, adding that he hopes Faust remembers him when he applies to Harvard in 2012.