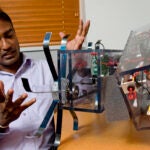 We are what we eat, and what we cook

By Steve Bradt Faculty of Arts and Sciences

“You are what you eat.” Can these pithy words explain the evolution of the human species?

Yes, says Richard Wrangham of Harvard University, who argues in a new book that the invention of cooking — even more than agriculture, the eating of meat, or the advent of tools — is what led to the rise of humanity.

Wrangham’s book “Catching Fire: How Cooking Made Us Human” is published today by Basic Books. In it, he makes the case that the ability to harness fire and cook food allowed the brain to grow and the digestive tract to shrink, giving rise to our ancestor Homo erectus some 1.8 million years ago.

“Cooking is the signature feature of the human diet, and indeed, of human life — but we have no idea why,” says Wrangham, the Ruth Moore Professor of Biological Anthropology in Harvard’s Faculty of Arts and Sciences. “It’s the development that underpins many other changes that have made humans so distinct from other species.”

Drawing on a wide body of research, Wrangham makes the case that cooking makes eating faster and easier, and wrings more caloric benefit from food. Moreover, he writes, cooking is vitally important to supporting the outsize human brain, which consumes a quarter of the body’s energy.

By freeing humans from having to spend half the day chewing tough raw food — as most of our primate relatives do — cooking allowed early humans to devote themselves to more productive activities, ultimately allowing the development of tools, agriculture, and social networks. Cooked food is also softer, meaning the body uses less energy digesting what it takes in.

Since physical remnants of fire tend to degrade rapidly, archaeological evidence of fire and cooking dates back only about 800,000 years. Wrangham looked to biological evidence, which shows that around 1.8 million years ago, Homo erectus arose with larger brains and bodies and smaller guts, jaws, and teeth — changes consistent with the switch to a more tender and energetically rich diet of cooked food.

“Cooking is what makes the human diet ‘human,’ and the most logical explanation for the advances in brain and body size over our ape ancestors,” Wrangham says. “It’s hard to imagine the leap to Homo erectus without cooking’s nutritional benefits.”

While others have posited that meat-eating enabled the rise of Homo erectus some 1.8 million years ago, Wrangham says those theories don’t mesh with that species’ smaller jaws and teeth. Instead, he claims meat enabled the shift from australopithecines to Homo habilis — a species about the size of a chimp, but with a bigger brain — more than half a million years earlier.

Wrangham says the adoption of cooking had profound impacts on human families and relationships, making hearth and home central to humanity and driving humans into paired mating and perhaps even traditional male-female household roles.

He writes that the advent of cooking permitted a new distribution of labor between men and women: Men entered into relationships to have someone to cook for them, freeing them up for socializing and other pursuits and bolstering their social standing. Women benefited from men’s protection, safeguarding their food from thieves. Homo sapiens remains the only species in which theft of food is uncommon even when it would be easy.

“To this day, cooking continues in every known human society,” Wrangham says. “We are biologically adapted to cook food. It’s part of who we are and affects us in every way you can imagine: biologically, anatomically, socially.”