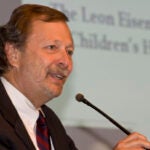 Over the next five years, Harvard will award grants to nonprofit groups serving North Allston/North Brighton.

An advisory committee made up of neighborhood residents chose the grant recipients after a detailed review process.

Six organizations share in the inaugural funding, with grants that range from $5,000 to $20,000. The money will go toward new projects, including an arts workshop, health education classes, and a poetry program for schoolchildren.

Harvard President Drew Faust – acknowledging “the hard times, the challenging times we all find ourselves in” – called the grants an example of the University’s sustained commitment to surrounding communities.

“We stand pledged to support that neighborhood connection,” she said, “to be your good neighbor, and to work together as partners in bringing some of these hopes and dreams to fruition.”

John Palmieri, director of the Boston Redevelopment Authority – which assisted the awards committee – pointed to a durable town-gown collaboration. “There is no better model,” he said, “than the Harvard-Allston model.”

Karen Smith, one of seven committee members, said the grants process was “an opportunity for true collaboration” that included voices from the neighborhoods, the city, and the Harvard Allston Task Force.

She called the grants process “joyful and easy.”

That was also true because of the quality of the applicants – many of whom already do great good with “modest dollars,” said Smith.

“They were all thoughtful; they were worthy,” she said of the applicants. “So many people are stepping up, often very quietly.”

John Hoffman is one. He’s executive director of The Fishing Academy, which received a grant this year.

For five years, his nonprofit public charity has sponsored river and ocean boat trips for urban youngsters. “It changes lives,” he said afterward.

Of the grant recipients, “We wish you every success,” said Smith. “We know you will inspire others to apply.”

Committee deliberations begin in September for the 2010-11 round of funding for Harvard Allston Partnership Fund grants.

The partnership fund is part of a cooperation agreement between Harvard and the city of Boston that has introduced new programs and neighborhood improvements in North Allston/North Brighton.

One such improvement already in place is the Harvard Allston Education Portal. More than 80 Allston-Brighton children are mentored by Harvard students there in science, math, and writing.

Forthcoming is Library Park, a one-acre public green space behind the Honan-Allston Library at 300 N. Harvard St. It’s currently in design and scheduled to be finished in 2011.

A closer look at the winners of this year’s Harvard Allston Partnership Fund grants: