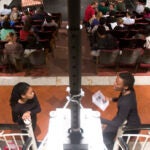 He may be best known as the creator of modern detective fiction, but there is more to Sir Arthur Conan Doyle than Sherlock Holmes. A new exhibition, “‘Ever Westward’: Sir Arthur Conan Doyle and American Culture,” opening May 5 at Houghton Library, hopes to paint a fuller picture of Doyle’s contributions to world literature, which range from historical fiction to personal memoir to science fiction and beyond.

Timed to coincide with the 150th anniversary of Doyle’s birth, the exhibition is accompanied by a three-day symposium that will examine Doyle’s literary legacy, as well as the enduring appeal of his most famous character: Sherlock Holmes.

“This exhibition will introduce people to a lot of items they wouldn’t normally see in a Doyle exhibition that focuses largely on Sherlock Holmes,” said curator and Houghton Library Coordinator of Programs Peter Accardo.

Visitors will view numerous letters from Doyle; a prescription written by the then-doctor Doyle, before he turned to writing; manuscripts, including a full manuscript for “The Adventures of the Three Students”; photos; prints; and several rare American editions of Doyle’s books, including a pirated copy of “The White Company,” a historical novel Doyle considered his best book.

The exhibition also serves as prelude for the May 7-9 symposium “Sir Arthur Conan Doyle: A Sesquicentennial Assessment,” which will include dozens of scholars and Sherlockians.