The Charles Eliot Norton Lectures on Poetry have from the beginning taken a broad definition of “poetry.” Those appointed to deliver them have included musicians – Igor Stravinsky and John Cage, for example – and visual artists such as Frank Stella, as well as poets in the more usual sense, such as T.S. Eliot.

But Daniel Barenboim, the internationally known Israeli conductor and pianist who has been serving as this year’s Norton professor, is a poet in the most elemental sense of the word’s Greek roots – a putter-together, an arranger – or, at a stretch, a “bridge builder,” as he is often called. 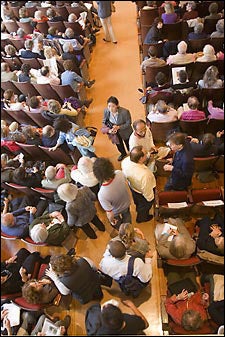 His six-part lecture series (Sept. 25-29 and Oct. 3), titled “Sound and Thought,” included a lecture focused largely on his understanding of music as a catalyst for political change. He also discussed his remarkable friendship with the late scholar Edward Saïd, of Columbia University, and their efforts to work together for peace and understanding by bringing Israeli and Arab musicians together.

In this talk, delivered to a capacity audience at Paine Hall, Barenboim described his view of how music is not “an alternative solution” to political strife but can be a model for other forms of human collaboration that can provide “an insight into the way the world can, and should, and sometimes does work.”

To perform well, Barenboim said, a musician must do two important things simultaneously: “Express yourself … and listen to others.”

That insight was the basis for the musical peacemaking he undertook with Saïd.

“Once the young musicians had agreed how to play the same note together, they would not be able to look at each other the same way as before.”

And if they could master the art of playing the same note simultaneously, then surely it would be easier to have dialogue, where partners take turns speaking, he added. “That was our starting point,” he said.

He recounted how he met Saïd “by chance,” in 1992, while checking into a hotel. He noticed “an elegant, well-dressed gentleman” coming toward him. He introduced himself as Edward Saïd. Observing that Saïd had first approached him when he had his back turned to him, Barenboim quipped, “You’ve been to my concerts! You recognize my back.”

It must have been a good note on which to begin a partnership.

“We became inseparable,” Barenboim said. After they became friends, he added, “I spoke to him practically every single day” until Saïd went into a coma in his final illness. Saïd died in 2003.

Saïd, he said, had had little contact with Israelis before getting to know him. Those he had met were either anti-Zionists with grave doubts about the whole enterprise of the Jewish state, or nationalists with whom he had little in common. “In me he met someone who wasn’t in either camp.”

Barenboim described himself as someone whose family had brought him as a child to Israel to give him the experience of living no longer as part of a religious minority, but in a majority Jewish society – but who began to have misgivings when, after the Six-Day War of 1967, he said, “we found ourselves in control of another minority.”

The primary vehicle for Barenboim and Saïd’s collaboration was the West-Eastern Divan, which they founded in 1998. (The unusual name comes from the title of a collection of poems by German poet Goethe, whom Barenboim credited with being “one of the first Europeans to be genuinely interested in Arab culture.”)

The West-Eastern Divan Workshop brought talented young musicians from Egypt, Syria, Lebanon, Jordan, Tunisia, and Israel together to make music on neutral ground. For their work on this project, Barenboim and Saïd received Spain’s prestigious 2002 Prince of Asturias Concord Prize.

The Argentinian-born Barenboim has been performing since 1950. This June he concluded 15 years as music director of the Chicago Symphony Orchestra. In 2000, the Staatskapelle Berlin appointed him chief conductor for life. Earlier this year he was named Maestro Scaligero at La Scala, Milan, where he will next perform Verdi’s Requiem in November 2007, and a Wagner Ring cycle in 2010/2011.

Barenboim has been awarded the Tolerance Prize by the Protestant Academy of Tutzing (Germany) for his efforts to bring Palestinians and Israelis together through music, and the Grosses Bundesverdienstkreuz, from Germany, the highest honor given to someone who is not a head of state.

The Charles Eliot Norton Professorship of Poetry was established in 1925 in memory of Harvard’s first fine arts professor, who taught the subject from 1874 to 1898. Over the years, the Norton Chair has become one of the nation’s most illustrious guest lectureships.