Research shows who dies when and where

Results were the second best in Harvard's history

More than 89,000 donors contributed to Harvard in 2006, up from 88,000 last year. “Our fundraising remained strong throughout the year,” Rapier said. “We are enormously grateful to our alumni and friends for their generosity and continued dedication to Harvard.”

Fiscal year 2006 fundraising results were the second best in Harvard’s history, ranking behind fiscal year 2001, when the University raised $658 million. In that extraordinary year, Harvard received a one-time gift from the Ford Foundation of $50 million, as well as four other gift payments of $25 million or more.

This year’s totals are particularly remarkable when compared with last year because Harvard Business School (HBS) peaked in fiscal year 2005, the final full year of its campaign, at $125 million, contributing substantially to the large increase for the University from 2004 to 2005. HBS gift receipts declined this year by $68 million to $57 million, an impressive level still considerably higher than pre-campaign years. Increases in other parts of the University in fiscal year 2006 more than offset this decline.

The Faculty of Arts and Sciences (FAS), which includes Harvard College and the Graduate School of Arts and Sciences, received $193 million this year – $25 million (15 percent) higher than the previous year and $21 million (12 percent) higher than fiscal year 2004. This total represents the generosity of tens of thousands of donors, who have provided critical funds for the FAS to address core and emerging needs such as financial aid and fellowship programs, faculty expansion, undergraduate experience initiatives, research, and construction projects. Of particular note is the record-breaking Harvard College Fund Class of 1981 25th reunion gift, which garnered gifts and pledges totaling $41 million, the highest ever for a 25th reunion and the second highest ever overall. More than 75 percent of the class participated in this drive.

Harvard Law School launched one of the most ambitious campaigns in the history of legal education in 2003. The campaign has already raised nearly $300 million and, with two years remaining, is on target to reach its $400 million objective.

Among the many generous new commitments to Harvard announced in fiscal year 2006 were a $100 million gift from Eli and Edythe Broad to support the Broad Institute; $26 million in grants from the Bill and Melinda Gates Foundation to support work in global health; $20 million to create the Prince Alwaleed Bin Talal Program for Islamic Studies; a $15 million endowment from Sharmin and Bijan Mossavar-Rahmani MPA ’82, GSAS ’88 to the Kennedy School of Government’s Center for Business and Government; $15 million from the Victor [Ph.D. ’71] and William [M.B.A. ’72] Fung Foundation to the Harvard University Asia Center; a $14 million contribution from H.H. Sheikh Mohammed Bin Rashid Al Maktoum to support the Dubai Harvard Foundation for Medical Research; a $12 million bequest receipt from Horace Chapin A.B. 1871, LL.B. 1875 for the Harvard University Art Museums; a $12 million donation from Jerome Rappaport A.B. ’47, LL.B. ’49, M.P.A. ’63 and the Jerome Lyle Rappaport Charitable Foundation to endow Harvard’s Rappaport Institute for Greater Boston; a $10 million contribution from David Rockefeller A.B. ’36, LL.D. ’69 to support Harvard’s Latin American Studies Center, bringing his total commitment to the center to $25 million; and $10 million from Jerry A.B. ’61, M.B.A. ’67 and Darlene Jordan to support the Harvard Stem Cell Institute and to enrich the Harvard College student experience. In addition, six generous alumni established a $50 million University Professorship Challenge – a matching fund intended to encourage alumni and friends to endow named professorships across the University and provide other critically needed faculty support. 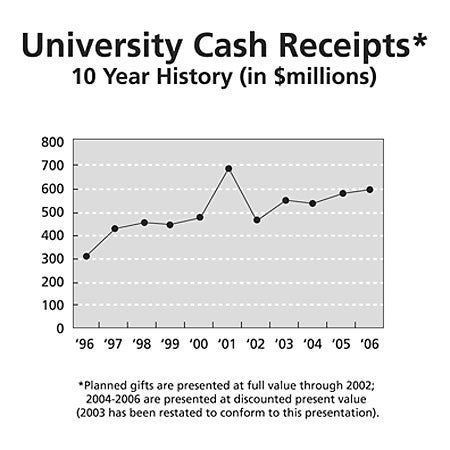