Experts seeking to explain the amazing diversity of the tropical rain forest have typically done so in two ways, viewing forests as either “evolutionary cradles” that encourage the rapid development of new species, or as “evolutionary museums” that allow species to accumulate over time.

New work by Harvard researchers on tropical beetles indicates that both views are right.

“We try to point out that tropical diversity is not easily explained by any one hypothesis,” said Duane McKenna, a postdoctoral fellow in the lab of Professor of Biology Brian D. Farrell, an evolutionary biologist and expert in beetle systematics. McKenna graduated in June with a doctorate from the Department of Organismic and Evolutionary Biology, where he worked in the Museum of Comparative Zoology with Farrell. He is continuing his work, seeking to understand patterns of diversification and relationships of major beetle lineages.

McKenna and Farrell, who coauthored a paper on their work appearing in the June 27 issue of the Proceedings of the National Academy of Sciences, examined the evolutionary radiation of Cephaloleia beetles, of which 202 species are known.

Using a variety of data, including DNA sequence data and an examination of the fossil record, McKenna and Farrell reconstructed the Cephaloleia family tree, looking at when the beetles diversified and why.

What they found was a series of climatic, tectonic, and biotic events that sparked the development of new species, called evolutionary radiations. McKenna said that the beetles’ reconstructed evolutionary history showed them that relatively recent and rapid diversification, as predicted by “cradle” models, and relatively ancient diversification and preservation of species diversity, as predicted by “museum” models, explain different components of the group’s evolutionary history.

“Taken together, they’re a much, much more robust explanation,” McKenna said.

Looking back in time, McKenna said there is evidence that Cephaloleia existed as long as 65 million years ago. The impact of an enormous meteor, comet, or other astral body on the Yucatan Peninsula at about that time is thought to have led to the extinction of many large animals, including many dinosaur species. But McKenna said it also devastated insect and plant populations.

Cephaloleia was among the survivors, though McKenna said even its numbers were likely severely reduced by the impact.

In the centuries following, the surviving Cephaloleia appear to have developed into many new species, taking advantage of the newly available environmental niches left by those eliminated.

Several other major events sparked further radiation, McKenna said, including geologic events like the uplifting of the islands that made up Central America into a continental land mass and the joining of Central and South America through the isthmus of Panama. 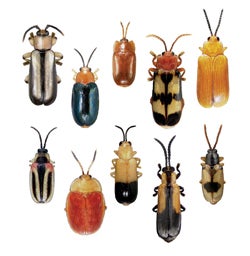