Eating plants that grow on plants

Pilot study will retrofit Gund Hall with a green roof 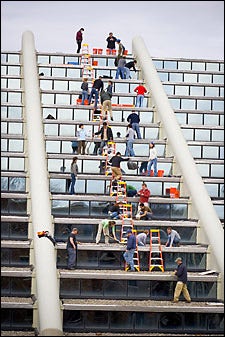 Fifty students from the Graduate School of Design (GSD) climbed out onto Gund Hall’s stepped roof this week (April 19 and 20) to strew sedum on the rectangles of gravel ballast. The project is a pilot study to see if Gund will become Harvard’s first building to be retrofitted with a green roof.

If all goes well, the sedum will take root and cover the 18-by-21-foot trays with a low carpet of green. The pilot project will cover approximately 3,000 square feet or 20 percent of the roof area and test different soil mixtures with varying amounts of organic matter. The goal, after a monitoring period of two to three years, is to turn the entire roof green.

According to Christian Werthmann, assistant professor of landscape architecture and one of the project’s directors, there are many advantages to a green roof. The most striking is that when fully greened, Gund’s roof will absorb 500,000 gallons of rainwater per year. This same amount of water falling on a bare roof simply drains onto the ground and enters the sewers as storm water, having picked up numerous pollutants along the way.

A green roof also moderates temperatures, both inside and outside, cutting down on the electricity needed for air conditioning in the summer and mitigating the “heat island” effect that causes cities to be hotter than the surrounding countryside. 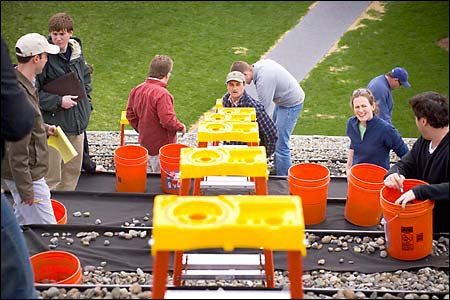 The sedum plants chosen for the pilot project are ideally suited for such use, said Werthmann.

“They are really tough. They grow on loose rock and gravel on mountain slopes. After a heavy rainfall, the rocks get tossed around and the torn pieces of sedum just regrow. What we are doing is creating an artificial mountain slope.”

Surprisingly, another advantage of a green roof is that it has been shown to double the roof’s life span. What causes the greatest damage to roofs, said Werthmann, are extremes of temperature. The rapid heating and cooling breaks down the layers of insulation and waterproofing material that lie beneath the gravel ballast. But when plants are grown over this material, they moderate the temperature and extend the life of the roof.

Werthmann said he visited a water treatment plant in Zurich, Switzerland, whose green roof is 90 years old and in perfect shape. Not only that, but because it is protected from grazing animals and foot traffic, it has become a haven for exotic plant life, including about 4,000 orchids.

Gund’s green roof may not sprout orchids, but it will have the advantage of being inexpensive. Werthmann estimates it will cost less than $1 per square foot, compared with the $10 to $20 per square foot that green roof contractors generally charge.

“We are trying to make it as simple and low cost as possible,” he said.

Werthmann’s collaborators on the green roof pilot project are Katrin Scholz-Barth, a green roof consultant and a lecturer in Landscape Architecture, and Loeb Fellow Barbara Deutsch.

For a revealing look at the green roof project, see the exhibition in the lobby of Gund.