When the busload of Harvard undergraduates arrived at Benjamin Franklin Elementary School in New Orleans, one of the city’s first schools to reopen after the devastation of Hurricane Katrina, the back yard was a debris-clogged mess.

When they left, it had a butterfly garden and room for recess. And in the insides of four classrooms, peeling paint and water stains had been transformed with a fresh coat of light blue and yellow.

The Harvard students are back on campus now. Their trip to New Orleans and three Mississippi communities – Jackson, Moss Point, and Ocean Springs – is over. But though they’ve gone and come back, many participants say they’re not the same people they were when they left.

“It was something I know I’ll never forget. It actually has been a transforming experience for us,” said Gayatri Datar, a first-semester junior from Lowell House.

After a week of back-breaking labor, clearing debris, building and rehabbing homes, sleeping on the floors of local churches, and, most importantly, reaching out to the devastated inhabitants of this destroyed region, the students have a new understanding of the Gulf Coast residents’ near-impossible burden.

Some students are imbued with a new sense of mission. Some are stunned that the devastation still exists so many months later. And some are just plain angry.

“I just can’t believe it’s not still on TV,” said S. Margaret Spivey, a Georgia native who said the area reminded her of home. “I just got so upset. I thought if a city in the Northeast looked like New Orleans, it’d be on TV every day.”

Spivey and Datar were among 80 students who traveled to the four Gulf Coast locations to help with rebuilding efforts during the late January break between fall and spring semesters.

The trip was organized by the Phillips Brooks House Association (PBHA) with funding from the Harvard/MIT Cooperative Society, which encouraged members to donate their annual rebate to help with the post-Katrina rebuilding. Dubbed PBHA’s Helping Rebuild the Gulf Coast Trips, the initiative included students from a variety of backgrounds and the members of one existing student-led service program, Harvard Habitat for Humanity.

The Harvard Habitat group provided the volunteer labor for a Habitat for Humanity “blitz” in Jackson to rapidly build a home for a displaced New Orleans family. The house, complete with a roof, doors, and windows, only needed sheet-rockers and painters to complete the finishing touches when the students left, according to Marisa Flavin, one of the student leaders of the Harvard Habitat group.

In an effort to rebuild New Orleans Public Schools, about 20 Harvard Graduate School of Education (HGSE) students will travel to the city during the Feb. 18-26 school break.

As part of an effort launched by two HGSE students who previously taught in the New Orleans school district, the students will focus on providing much-needed support to the Samuel J. Green/New Orleans Charter Middle School. The ways HGSE students will aid the middle school include creating a student record system, teaching fourth- and eighth-grade students in literacy and mathematics in order to prepare for the Louisiana Education Assessment Program tests, and helping with the large influx of new students returning to the school. This opportunity offers another way HGSE students can learn by connecting with educational leaders and students in one of the nation’s most challenged urban school districts.

HGSE students will stay with New Orleans families and pay for their own food and airfare through a fundraiser. The estimated cost is $500 per student.

In Moss Point, Cambridge’s sister city, students helped repair homes damaged by the hurricane with a focus on elderly inhabitants. In Ocean Springs, students removed debris and helped dig out a home partially buried by sand. In New Orleans, students worked in two schools, helping with both recovery-related repairs and academics.

Many of the students spoke of their surprise at the level of destruction that still remains in New Orleans months after the hurricane had passed. Several spoke of the utter destruction of New Orleans’ Lower Ninth Ward, visited during a Sunday afternoon tour provided for the groups, where cars are still overturned in the streets, spray-painted “DOA” signs still mark homes where rescuers found no life, and it seemed that no home escaped the destruction.

PBHA’s Class of ’55 Executive Director Gene Corbin said the feedback from those the students helped has been overwhelmingly positive. With the national spotlight shifted elsewhere and an enormous cleanup and rebuilding task still ahead, Gulf Coast residents said the students’ efforts let them know they’re not forgotten.

“‘These students brought an emotional lift that I needed right now.’ I heard that over and over at each site,” Corbin said.

Rebecca Bidwell, project manager for Communities in Schools, one of the groups hosting the Harvard students, said the students’ impact goes far beyond the planters they built for the butterfly garden and the classrooms they painted.

“It helps show the people of New Orleans, the schoolkids, the elderly, the people living in the neighborhoods, that there are still people in the rest of the nation willing to give their time and talent to help better the situation that New Orleans finds itself in,” Bidwell said. 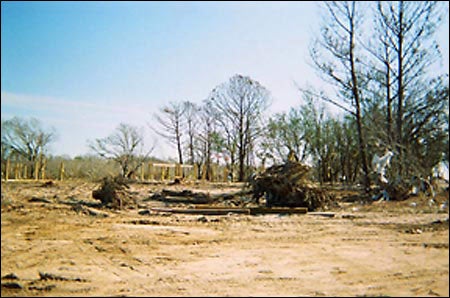 Corbin said that PBHA is finalizing plans to send another crew to the Gulf Coast during spring break in March.

“I’m ecstatic about the contributions our students made in these communities and about the transforming impact it had on the students themselves,” Corbin said.