Murakami is explorer of imagination

Haruki Murakami may not be a household word in the United States, but his name triggered enough interest, at least in the Cambridge area, to overwhelm the Reischauer Institute of Japanese Studies when it agreed to co-host a public appearance by the writer.

Reischauer Director Susan Pharr admitted as much in her introductory remarks Nov. 18 when she revealed how mistaken institute planners were when they predicted only a modest number would turn out for the event.

“Our co-sponsor, the Harvard Book Store, told us it would be more like 1,000. In fact it turned out that the ticket requests would have filled Sanders Theatre twice over,” Pharr said.

The venue, alas, was not Sanders, but the much smaller First Parish Church, which was packed to capacity by enthusiastic fans, many of whom had brought copies of Murakami’s books to be signed. According to Professor of Japanese Literature Jay Rubin, who has translated many of Murakami’s novels and stories and has written an important critical work on the author, if the event had been held in Japan, it would have attracted many times the number who flocked to his Cambridge appearance.

Who is Murakami and what makes him so popular? He is the author of quirky but strangely mesmerizing novels such as “Kafka on the Shore,” “Norwegian Wood,” “The Wind-Up Bird Chronicle,” and “Hard-Boiled Wonderland and the End of the World,” to name but a few. Many American readers have made his acquaintance through his short stories in The New Yorker and other magazines.

Rubin describes his first encounter with Murakami’s work in 1989 as something of a conversion experience. Knowing his reputation as a best-selling writer who was popular with younger readers, he expected to find “silly fluff about teenagers getting drunk and hopping into bed.” What he found instead changed his life.

“It absolutely blew me away. I hadn’t reacted to a writer so strongly since I was obsessed with Dostoevsky as an undergraduate. I used to be a scholar of Japanese literature. Now I’m a scholar of Murakami.”

What he most admires about Murakami is his oddball but gentle sense of humor, the surreal turns of his narrative, and “the way he deals with the big questions of life without really answering them.”

A member of Japan’s post-World War II generation, Murakami grew up listening to rock and jazz and reading authors like Kurt Vonnegut and Richard Brautigan. According to Rubin, he identified with this global culture rather than the more traditional culture of Japan, and his fiction is filled with pop references and expressions borrowed from English.

After this first encounter with Murakami’s writing, Rubin wrote to the author to say he liked his work and wanted to translate some of his short stories into English. Murakami was pleased with the result and asked whether it would be all right to publish Rubin’s translation of the story “The Second Bakery Attack” in Playboy. Rubin agreed, and the relationship between writer and translator began. 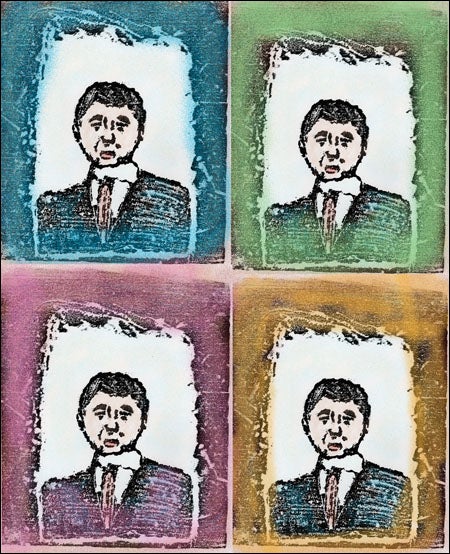 Rubin was instrumental in bringing Murakami to Harvard this year as a visiting artist-in-residence at the Reischauer Institute. It is Murakami’s second extended stay in the Boston area. From 1993 to 1995 he was a visiting professor at Tufts University.

As Rubin introduced Murakami at the Nov. 18 event, the author sat impassively through his translator’s warmly complimentary remarks. A small, trim man (he has run the Boston Marathon six times and considers physical fitness a prerequisite for novel writing), Murakami appeared much younger than his 56 years. Wearing a navy blazer and conservative tie, unpressed khakis, and brown leather sneakers, he looked more like a college senior dressed for a job interview than an internationally famous writer.

In his talk, “Frogs, Earthquakes, and the Joys of Short Fiction,” Murakami said that while the novel is the literary form that suits him best, he loves to write stories because they give him an opportunity to experiment. He described his working method as a kind of imaginative self-exploration.

“For me the short story is a place to try new ideas and see if they work or not. A single line of dialogue may come into my mind. I don’t need a structure or a form. I only need to see how that fragment fits into the story. The beauty of the short story is that you can test anything – a piece of conversation, a haunting memory, a dream, or something overheard in a restaurant.”

As an example, Murakami discussed his story “Tony Takitani,” which was inspired by a T-shirt he bought for $1 on the island of Maui. Murakami brought the garment with him and made a formal presentation of it to Rubin. It was only years after writing the story that he discovered that the real Tony Takitani was a lawyer who ran unsuccessfully for the Hawaiian legislature and that the T-shirt had been printed to advertise his candidacy.

Other stories are structured around rules Murakami sets for himself. In writing the stories in “After the Quake,” inspired by the Kobe earthquake of 1995, Murakami decided in advance that they would all be in the third person, that there would be no actual earthquake scenes, and that none of them would be set in Kobe. While writing another group of five stories, he began by making a list of certain words and ideas, then arbitrarily assigned three of the items to each story.

“It was like a game,” he said, which made writing the stories more fun. “If I have no fun, it’s going to be harsh, painful, and lonely writing day after day.”

Above all, he said, it is important for the short story writer to write a lot. Don’t be afraid of failure, he urged. The worst thing a writer can do is decide that he or she is going to write one great story. Writing is like catching a wave, and like a surfer, a writer cannot expect to catch a wave perfectly every time.

Writing stories is not easy, Murakami said. It requires great concentration. But the effort lies more in allowing the narrative to take you somewhere rather than setting the course yourself. Later in his talk, he shifted from the metaphor of the surfer to that of the equestrian.

“I need to hold tight to my horse, and if I am strong enough, the rest is rather straightforward.”

Whether describing the writing process as riding the waves or riding a horse, Murakami seemed quite certain of its value.

“Fiction has been around for a long time to warm the hearts and minds of people. I believe that it must contain something very deep, and I trust this power of narrative.”