Everything is beautiful in its own way

There are no animals Piotr Naskrecki doesn’t like, but he’s always had a preference for the tiny ones.

Ants, flies, beetles, spiders, millipedes, frogs, salamanders, lizards – most of us hardly notice such creatures as we stroll through a park or nature preserve, eyes peeled for a glimpse of a rare bird or mammal, but these are the animals that have intrigued Naskrecki since his childhood as a budding naturalist in Poland.

“I find a butterfly ten times more fascinating than a bird of paradise or an elephant. Their biology is far more interesting.”

Naskrecki believes that all children are captivated by bugs and other tiny creatures, but like Rousseau, he blames society for corrupting their natural proclivities. Parents and teachers are the ones most often responsible for persuading children that bugs are nasty, dangerous, and to be avoided, he says.

Naskrecki did not suffer that fate because his father, a scientist (astronomer), encouraged his interest in the natural world and fired his imagination by telling him that a large portion of Earth’s organisms remained undiscovered and unnamed. Since most of these biological unknowns are on the small end of the size continuum, Naskrecki’s penchant for minuscule creatures was reinforced.

His interest led him to earn a master’s degree in zoology in Poland and a Ph.D. in entomology from the University of Connecticut. He is now a research associate at Harvard’s Museum of Comparative Zoology.

But Naskrecki isn’t just another scholar whose youthful passion for his subject has led him to a life of undisturbed fulfillment in academe. In addition to being a scientist, he is also something of a missionary. He wants us all to appreciate the beauty and wonder of our smaller fellow creatures – not only because they are inherently worthy of interest, but because many of them are threatened with extinction.

The prognosis for endangered insects, arthropods, or arachnids is inherently worse than for larger animals because the smaller creatures lack charisma, at least in the eyes of most humans. Whales, pandas, and peregrine falcons manage to garner plenty of support from a sympathetic public, but, as Naskrecki points out, “When a beetle goes extinct, nobody notices.” 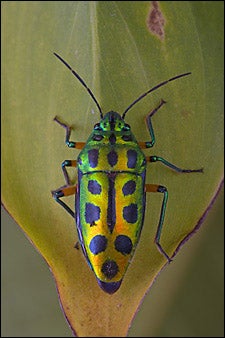 A member of the jewel bug family (Scutelleridae, left) from Guinea, West Africa. Unlike most moths, this leafroller (Pseudatteria leopardina, right) is active in the daytime. Its bright colors may be a defense against predators that learn to associate them with the repellent chemicals in the moth’s body.

Entomologists are particularly acquainted with these unheralded extinctions. It is not unusual for a taxonomist to discover an as-yet-undescribed insect in a museum collection, publish a paper on it, then discover that living specimens of the new species no longer exist in nature.

Naskrecki hopes his new book, “The Smaller Majority” (Harvard University Press, 2005), will win over some new advocates for the creatures he has spent his life studying. It is a gorgeous book, featuring hundreds of photographs from Naskrecki’s expeditions in Latin America, Africa, Australia, and the South Pacific – “a collection of my travel snapshots,” as he calls it.

Naskrecki has trained his macro lens on some of the rarest and most unusual living creatures on the planet. Some of them are still unclassified and, until now, unphotographed. And while some of the reproductions may show a tiny ant or spider enlarged to many times its original dimensions, Naskrecki says that his real aim is not to confer the gift of size on his tiny subjects.

“In my photography, I’m not trying to make them bigger. I’m trying to make myself smaller. I never pick up an insect and raise it up where I can see it more easily. Instead, I’ll get down on the ground and crawl around, trying to photograph it in its own setting.”

To reproduce these spectacular photos, Harvard University Press senior book designer Tim Jones has used a special six-color printing process that captures the vivid reds, oranges, and greens of the originals. The text is anecdotal and nontechnical, brimming with stories of the author’s revelatory and occasionally disastrous encounters with nature.

“Frankly, my target audience was myself when I was 12 years old. I would have loved to have discovered a book like this.”

But while “The Smaller Majority” is a spectacular publishing event, Naskrecki is well aware that it will take more than a book to save the creatures represented in its pages. Currently, it is estimated that 1,000 species are going extinct each year, many of them still undiscovered. The rate of extinction seems to be in inverse proportion to the growth of Earth’s human population. By the year 2025, it is estimated that the world’s population will reach 12 billion, or double its present size. By that time, we might have wiped out 90 percent of the world’s nonhuman species, Naskrecki says.

“It’s very difficult to find a solution. We’ve got to slow down the growth rate of the population. That’s the only thing that will save the planet.”

Besides trying to promote knowledge and understanding of the planet’s overlooked fauna through his book, Naskrecki also serves as director of the Invertebrate Diversity Initiative of Conservation International. The organization surveys habitats around the globe and designates some as “hot spots” – areas that contain diverse and richly interconnected collections of life forms and are also threatened by the encroachment of civilization.

Conservation International works with mining and logging companies whose activities imperil such environments and in many cases has convinced them to change their activities in order to protect the natural environment. Such outcomes are encouraging, but they may still be too little, too late.

“It’s my job to be optimistic, but it’s a scary prospect. It’s difficult enough to convince people to save an elephant or a gorilla. It’s much harder to get them to care about a tiny tree frog.”