Through the looking glass

Newly elected Serbian President Boris Tadic said a democratic Serbia and Montenegro could be a regional force for stability and economic growth, but warned that moves to further fragment the nation would work against those goals.

“Ensuring the growth of democracy is the biggest gift today’s leaders can give to their children,” he said.

A stable, economically prosperous Serbia and Montenegro would be a political and military anchor for the region, he said, and make the nation better able to fight the organized crime he cited as one of the region’s biggest problems. Organized criminal operations traffic drugs, weapons, and women and children through the region into the rest of Europe. 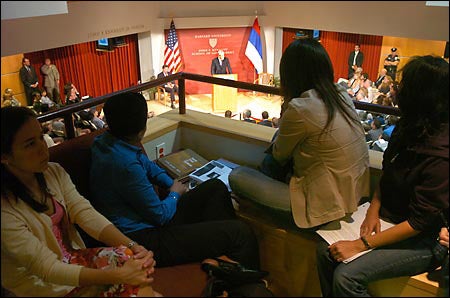 “Organized criminal activity is a threat to stability throughout the region,” Tadic said. “We need to secure our borders while facilitating the flow of people and goods.”

The governments of the region have already made important arrests in the war on terror and broken up terror cells, he said, and Serbia has sent troops to Afghanistan in an effort to draw closer to NATO.

Independence movements in Montenegro and the Serbian province of Kosovo, if successful, would set reform efforts back, he said, by partitioning the nation and perhaps sparking a return to the violence of the 1990s.

“Simply said, we can succeed or fail. If we succeed, we can cement the region’s democratic revolution. If we fail, we could plunge back into the violence … of the recent past,” Tadic said.

Tadic, who served as defense minister of Serbia and Montenegro from 2003 to 2004, spoke to a packed John F. Kennedy Jr. Forum at the John F. Kennedy School of Government. His talk, “Serbia: Consolidating Democracy and the Future of Kosovo,” was sponsored by the Kokkalis Program on Southeastern and East-Central Europe.

Tadic was introduced by Kennedy School Dean David Ellwood, who praised Tadic’s strategy of “hurry up, slowly,” saying that both an urgency for progress and the wisdom of patience are needed to navigate this important transition time in Serbia.

Tadic was a supporter of former Serbian Prime Minister Zoran Djindjic, who was assassinated in 2003, and has pledged to emulate Djindjic’s support for a democratic, free-market Serbia with close ties to Europe, and to push for European Union membership as quickly as possible.

EU membership will help generate economic growth and alleviate the “unacceptable” poverty that many find themselves in, Tadic said.

“The EU accession process will secure the region’s prosperity,” Tadic said. “It is morally unacceptable for democracy and poverty to coexist in modern Europe.”

Serbia and Montenegro, along with Macedonia, Bosnia and Herzegovina, Croatia, and Slovenia, made up the nation of Yugoslavia until its breakup in 1991, when four of the six Yugoslav republics declared independence.

Though the former Yugoslav republics of Serbia and Montenegro remain united, there is an independence movement in Montenegro that Tadic warned would be harmful for the goals of political stability and economic growth. The discussion about the future of the Serbian province of Kosovo, which is administered by a United Nations peacekeeping force after NATO intervention ended violence there in 1999, could result in an independent republic of Kosovo. While Tadic said the concerns of Kosovo’s majority ethnic Albanian population must be heeded, he opposed creation of an independent state.

Tadic acknowledged that Serbia has to assist efforts to bring war criminals to justice in order to put the nation’s recent violent past behind it, though, in response to questions, he said did not know where former Bosnian Serb military commander Radko Mladic was and so could not promise when he would be captured and handed over to the International Criminal Tribunal for the Former Yugoslavia.

“All those who committed crimes must be held accountable,” Tadic said. “We must take down the walls of mythology and tear down the heroic labels for men who committed atrocities in our name. It is our responsibility to our children to account for the past and plan for the future.”