‘Movie Time’ rolls out double feature in the Yard

Ambivalence is such a common condition in our complex and uncertain times that it is astonishing to learn that the word has existed for less than a century. It was coined by Swiss psychiatrist Eugen Bleuler in 1911 to describe a condition in which a person holds contradictory feelings toward someone or something.

But does the word’s recent coinage mean that in pre-Bleuler times no one was ever of two minds about anything? Virginie Greene’s current scholarly project is to trace the concept of ambivalence back to the literature and philosophy of the Middle Ages.

Greene, an expert on medieval French literature who has taught at Harvard since 1998, was promoted to a tenured position in Romance Languages and Literatures this year. Born in France, she traces her academic interests to an early obsession with legends, myths, and folktales.

As a young girl in the town of St. Dié in Les Vosges, a region of northeastern France that she describes as looking “a little bit like Vermont” with Germany’s Black Forest just across the Rhine river to the east, Greene devoured every collection of such stories she could get her hands on.

Her childhood passion led to an interest in classical Greek, which she began studying at the age of 13, later adding Latin to her repertoire of ancient languages. At the University of Paris IV she switched her focus to the Middle Ages, influenced by such groundbreaking historians as Georges Duby and Jacques LeGoff. 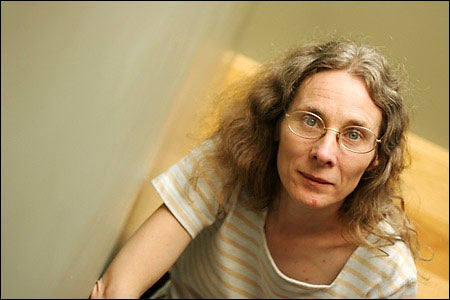 “They opened up the field of medieval studies. They were interested in every aspect of human life – daily life, the arts, women.”

She continued her studies at the University of Illinois, earning a Ph.D. in French literature in 1998. Her doctoral dissertation was published in 2002 as “Le sujet et la mort dans La Mort Artu.”

The book is a study of subjectivity and death in medieval Arthurian romance. What particularly interests Greene is the way the narrators of these texts announce at the outset that the main characters are all going to die.

“What does this awareness of mortality create in the text? How does it change the reader’s perspective on the character?”

Greene considers such questions important because of the place romances occupied in medieval culture.

“The romance is entertainment. Religion is not very prominent in these texts. They’re not didactic. Their business is not to preach but to tell about the lives of the characters. And yet they are not light entertainment. They offer another discourse on death other than the religious one.”

What she discovered is that the way characters encounter death tells the reader a great deal about their individual personality.

“These characters may seem stereotypical to us,” she said. “But when you read carefully, you can see their individuality, their psychological complexity.”

Greene’s interest in psychology does not involve projecting modern diagnoses onto medieval characters, but rather in applying the concept in its broad, original sense – the study of the psyche or soul.

“I believe literature is the study of the soul. For me it has a lot to do with the concept of how humans function internally.”

Greene’s current research extends her interest in the psyche into new areas. The task she has set herself is to explore ambivalence and contradiction at a time when these conditions had not yet acquired their present-day clinical definitions. This line of research has taken her to Aristotle, a major influence on medieval thought.

“Aristotle believed that contradiction should be avoided at all cost for the sake of logical thought. He put contradiction outside the realm of rationality.”

And yet, Greene points out, in the context of the Christian Middle Ages, “God can trump rationality, as humans perceive it. A miracle is a contradiction, but in the Christian mind-set, it is possible.”

Greene plans to pursue these ideas through the work of medieval philosophers and romance writers to cast light on the struggles of heroes torn between such opposites as hate and love, faith and doubt. She believes that by exploring the history of these concepts, scholars can illuminate not only the past but the present as well.

“I’m interested in looking at concepts of today and what happens when you bring them back into the past. It helps me better understand our own culture, which is rooted in the past, to see how ideas evolve and come down to us.”

In her teaching, Greene adapts her scholarly interests to every academic level from freshmen to graduate students. This fall, for example, she will teach a freshman seminar on medieval Arthurian literature in translation and a graduate seminar, conducted in French, on subjectivity in medieval literature. In the spring, she will teach an upper-level course on medieval romances of the 12th to the 15th centuries, also conducted in French. Other subjects she has taught or will teach include the history of the French language and the image of the Middle Ages in the literature of the 19th century.

As a member of the tutorial board of the Committee on Degrees in History and Literature, Greene brings a special awareness of the interconnectedness of these two disciplines.

“When you work in the Middle Ages, you’re forced to study history in order to understand how people lived. Otherwise, it’s impossible to understand the texts. Medieval studies offer an excellent opportunity to bring these disciplines together.”