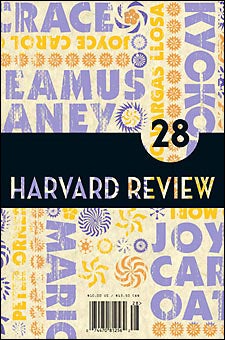 “Justice Shiva Ram Murthy” follows the cross-cultural experiences of an older Indian man who travels to the United States to live with his daughter. A judge in his homeland, the protagonist grapples with the loss of status in a culture he doesn’t quite understand. Local author Reddi is the recipient of a 2004 Massachusetts Cultural Council grant. She has also been a NIMROD/Hardman semifinalist, a Glimmer Train Emerging Writers Competition finalist, and a Vermont Studio Center Fellowship grant recipient.

The new issue of Harvard Review is due for release in June, and according to editor Christina Thompson, “it’s a wonderful issue.” Harvard Review 28 contains fiction from Joyce Carol Oates and the English writer Jim Crace; a new introduction to “Don Quixote” by Mario Vargas Llosa written in honor of the work’s 400th anniversary; poetry by Seamus Heaney and Samuel Menashe, and photographs by John Coplans.