Harvard Business School dean to step down, move on

Harvard Business School Dean Kim B. Clark announced Monday (June 6) that he will step down on July 31, in order to accept the role of president of Brigham Young University, Idaho, shortly thereafter. Clark was named dean of Harvard Business School (HBS) in 1995; he is the eighth dean in the School’s 97-year history.

“I have been fortunate to lead the finest business school in the world during a remarkable period of renewal and growth,” said Clark. “As I move on to a new phase of my life, I look back on my tenure at HBS as an extraordinarily rewarding experience, both personally and professionally. This is a unique and very special place that is totally dedicated to its mission of educating leaders who make a difference in the world, and I am proud to have been part of this School for nearly three decades.”

Clark also noted, “I have thoroughly enjoyed working with President Larry Summers, and helping him carry out his vision for Harvard University. I greatly appreciate the support he has offered me in leading Harvard Business School during one of the most exciting periods in its history.”

“Kim Clark has been an extraordinarily effective leader of Harvard Business School, and someone whose wisdom, perspective, and openness have contributed a great deal to the University,” said Summers. “HBS has thrived under his leadership, further strengthening its faculty, enhancing the experience of students, pursuing research that bridges theory and practice, and extending its international reach. It has also forged important new connections with different parts of Harvard. I join Kim’s many admirers in saluting his accomplishments and wishing him all the best in the new challenge before him. He will remain a valued colleague and friend.”

During his nearly 10 years in office, Clark oversaw a 20 percent growth in the faculty, as he focused on expanding the range of the School’s research with power in practice while also strengthening its well-known commitment to course development and teaching. During the same period, the School’s endowment rose from $550 million to more than $1.8 billion, providing a solid base for attracting the best students and faculty, and increasing global impact and outreach. The School’s 42-acre campus was also renewed and transformed by the addition of more than 325,000 square feet of new facilities, including housing, a student center, classrooms, and an expanded library/academic center. 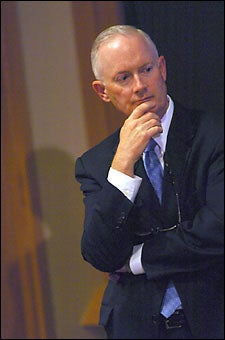 Clark spearheaded a number of strategic initiatives that have strengthened key areas of teaching and research at HBS, including entrepreneurship, leadership and values, and the use of technology to broaden and deepen the learning experience. As part of a major effort to expand the School’s involvement in and understanding of the global arena, HBS has established a network of six research centers in Europe, Latin America, Asia-Pacific (Hong Kong and Tokyo), India, and California (Silicon Valley). These centers support faculty research and course development by building relationships with leaders in business, government, academia, and other organizations worldwide.

Under Clark’s leadership, HBS also significantly enhanced the diversity of its student body, a factor critical to the vitality of the discussion-based case method of teaching that is the hallmark of the School. The percentage of international students has jumped from 23 percent for the M.B.A. Class of 1995 to 33 percent – representing more than 70 countries – for the Class of 2006. At the same time, the percentage of women has grown from 28 percent in 1995 to 34 percent in 2006, while minorities have climbed from 14 percent to 21 percent.

C.D. Spangler Jr. M.B.A. ’56, recent chair of the Harvard Business School Visiting Committee, said, “The mission of the School, its leadership, and its execution have all been in alignment during Kim Clark’s decade as dean.” Spangler added that Clark took an excellent business school and made it better: “The students, the faculty, the research, and the campus are ready for the 21st century because of Kim’s leadership. He has, indeed, made a difference.”

An expert in technology and operations management, Clark, who is the School’s George F. Baker Professor of Administration, has been a member of the HBS faculty since 1978. He received the A.B. (1974), M.A. (1977), and Ph.D. (1978) degrees, all in economics, from Harvard University. He is a native son of the West, having grown up in Washington and Utah.

With Clark departing HBS as of July 31, Summers said he expects to launch a search soon and to name an acting dean to serve while the search proceeds. “I will of course want to benefit from the perspectives and counsel of the faculty, and of people across the HBS community, at this important time of transition for the School,” he said in a message regarding the appointment of an acting dean and the process of seeking a new dean. “Together we will assure that the tradition of excellent leadership at Harvard Business School carries forward into the future. For now, I hope you will join me in recognizing Kim Clark’s distinguished service to the Business School and the University and thanking him for a job so skillfully done.”