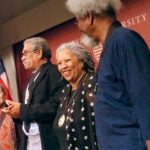 If required, instruction could also be given in chemistry (pending available laboratory space), Sanskrit, comparative philology, and Romance philology.

Full tuition costs $200; a single course is $75. With this fee structure and $16,000 in contributions, the committee expects the educational experiment to survive four years.

May 23, 1910 – The Harvard Corporation formally adopts crimson as Harvard’s official color, based on the tint of several silk scarves used by Harvard rowers in the 1858 Boston City Regatta and preserved in the University Archives.

May 26, 1921 – In the Faculty Room of University Hall, the Harvard Memorial Society presents the University with a portrait of Charles Eliot Norton, the late History of Art Professor Emeritus. Professor George Herbert Palmer speaks.

May 14, 1942 – Peruvian President Manuel Prado visits Harvard during a “Good Neighbor” tour of the eastern U.S. (His son Manuel I. Prado is also a senior at the time.) During a special welcoming ceremony in the Faculty Room of University Hall, Prado brings greetings from Lima’s University of San Marcos (est. 1551), where before his election he had taught calculus. From the steps of Widener, 1,000 students cheer him.

– From the Harvard Historical Calendar, a database compiled by Marvin Hightower