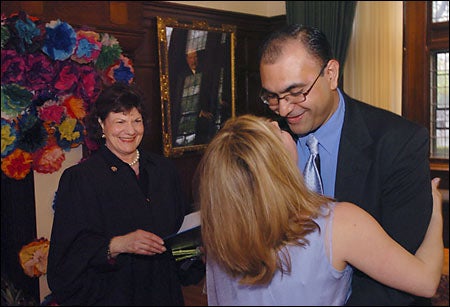 After 10 years as a justice of the peace, Wilma Stahura has plenty of wedding stories.

There was the bearded, Harley-riding groom who got so choked with emotion during the ceremony that he couldn’t get out the words, “I do.” There was the bride who got lost driving to the historic building where the wedding was held and had to be talked in via cell phone. And there was the Jewish groom who wanted the traditional breaking of a glass underfoot and his Chinese soon-to-be mother-in-law who believed that breaking anything at a wedding would bring bad luck.

But mostly what Stahura remembers is the experience of being an indispensable part of a couple’s very special day.

“It’s a joyful, memorable moment. Everybody’s happy, and I feel privileged to know that I’ve played a part in their lives that they’ll remember always.”

Stahura is an administrator in Harvard Medical School’s Department of Health Care Policy. She first thought about applying to become a J.P. when she was living in Sandwich on Cape Cod and the local Episcopal minister remarked that he wished there was someone in town to perform marriages for people who didn’t fit the requirements of the established houses of worship – who were of different religions, or no religion, or divorced, or whose plans didn’t coincide with any church schedule.

Stahura got her appointment, took her oath of office, and set herself up in practice. The laws of Massachusetts don’t require a J.P. to do all that much – certify the license, record the address, sign his or her name, and say the words, “I now pronounce you husband and wife.” But Stahura works with couples to create a more personal experience.

“Every ceremony is customized for that particular couple. I meet with them, give them choices, I encourage the participation of friends and family. If there are children I try to get them involved because it gives them a feeling that they’re part of something that’s going to change their lives.”

But despite the care she takes to bring everyone together, occasionally there are holdouts. Sometimes parents from a more traditional background will feel disappointed that their child is getting married in a civil ceremony. These are the ones that Stahura tries hardest to reach.

“The ceremony isn’t religious, but it is spiritual. It’s about commitment, love, sharing, forming a new bond, and moving into a new life together. I feel very gratified when parents say that it was meaningful to them.”