‘New cause’ for Edwards: Eradicate poverty 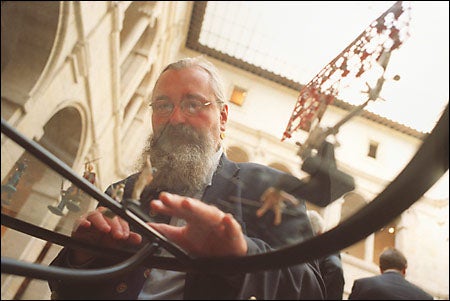 The Gaesatae were a tribe of ancient Celtic warriors who went into battle stark naked, the better to impress their enemies with their fearlessness. In order to appear even more terrifying many of them spiked their hair, stiffening it with lime. Would the lime have made their hair white? Dan Meagher wanted to know. After reading through all the literary sources he could find and consulting with scholars in Harvard’s Celtic Department, Meagher learned that the treatment would have turned their punked-out coiffures a flamelike orange. Only after he had researched this detail to his satisfaction did he dip his brush into a bit of specially mixed pigment and paint the hair of a tiny Gaesatae figurine the appropriate shade.

Meagher’s hobby is painting toy soldiers. He has been at it about 10 years and has accumulated a collection that includes armies from ancient Greece and Persia, the Roman empire, the Thirty-Years War, the Napoleonic era, the American Civil War, and World War I, to mention a few. Most of them are 1/72 scale, which makes each figure about 1 inch tall. Despite their size, they are historically accurate and highly detailed, scaled down from meticulously sculpted maquettes and cast in metal or plastic by specialty manufacturers. And Meagher’s paint jobs do full justice to the figures’ accuracy and aesthetic qualities.

A guard at the Harvard University Art Museums and president of the museum guards’ union, Meagher was advised to take up a hobby by his doctor who was concerned about his high blood pressure. Today the blood pressure is under control, and Meagher attributes at least some of that improvement to the therapeutic effect of his minuscule warriors.

“When I get too stressed out, I go home and sit down with my toy soldiers and paint. It brings on a different consciousness. You’re not thinking about other things. It’s a contemplative experience.”

The hobby also fits well with Meagher’s interest in history. In fact, talk with him a while, and you realize that the toy soldiers are really a sort of artifactual footnote to his wide historical reading, a pursuit that often leads him down some fascinating but little-traveled byways.

“A lot of the books I check out of the library have never been checked out before. I think I’ve put bar codes on more books in Widener than some librarians.”

More than a pastime, reading history is, in Meagher’s view, vital to a person’s personal and civic life, on par in importance with scientific literacy.

Politically, Meagher considers himself a man of the left, but neither his reading of history nor his union activities are guided by a strict, doctrinaire perspective.

“I believe the inner life of human beings is what drives things. Fascism was the darkest thing humans ever came up with because it denies that inner life.”