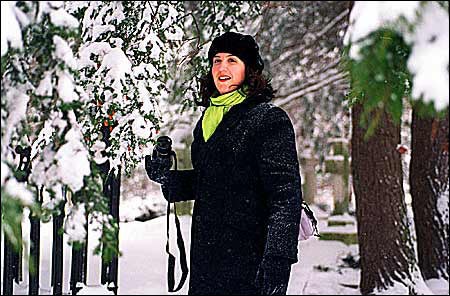 Maria Valgenti loves to photograph buildings. She feels a rapport with them that eludes her when she tries to capture human subjects.

“I finally realized that I take terrible pictures of people. Unlike people, buildings listen to me. I can get them to do what I want.”

Most of Valgenti’s photographs are taken in Italy, which she first visited at age 9 with her mother, a travel agent. She has been back many times since, camera in hand, looking for that special play of light and shadow on the eroded surface of an ancient stone wall or the carved acanthus leaves of a Renaissance capital. Florence, Rome, and Venice are her favorite places for architectural discovery, but her travels have also taken her to such out-of-the-way spots as Artin, a small village in the Dolomites that is home to some of her family members.

“I’ve been to Paris, and I’m planning trips to Belgium, England, and the Scandinavian countries, but Italy seems to be a beacon that is always calling to me.”

A graduate of Penn State with a B.A. in art history, now working toward an M.A. in the history of art and architecture at Harvard Extension, Valgenti recently has taken her special relationship with buildings to a new level, selling her photos in the form of prints and greeting cards on the Internet.

“I’ve always taken photographs when I travel. It’s nice to be able to share them with a few more people. Even if nothing comes of it but selling a few prints here and there, it still gives me an excuse to go traveling.”

When she is not focusing her lens on Venetian canals or Roman monuments or – a more recent interest – the woods, country roads, and church steeples of New England, Valgenti can be found at the Blackstone steam plant at the corner of Western Avenue and Memorial Drive, the facility that once powered the first electric street lights in Cambridge and now heats 80 percent of the buildings on the Harvard campus.

Valgenti works there as an assistant to Thomas Vautin, associate vice president for facilities and environmental services. And, as befits a person with a feeling for architecture, she also serves on the team that is planning the renovation of the building complex and researching the history of its more than 100 years of existence.