Removal of both breasts reduces elevated risk of breast cancer

By Rob Meyer Special to the Harvard News Office

Sidney Coleman is famous for his physics and his wit, and both were celebrated at a recent conference that included a history-making combination of winners of nine Nobel Prizes, a Fields Medal, and an Oscar.

The setting was a March 18-19 gathering at Harvard to commemorate quantum field theory and the scientists who brought it to life in the 1960s and ’70s, signaling a golden era in particle physics.

Quantum field theory represents a set of principles in which the interactions between particles can be defined in a way that is consistent with special relativity. It gave physicists the tools to describe with great success three of the four known forces in nature: electromagnetism, and the strong and weak nuclear forces. Physicists are still working on figuring out how the fourth, gravity, fits into the scheme of things.

Much of the work on quantum field theory was done at Harvard by professors like Steven Weinberg, Sheldon Glashow, Howard Georgi, and Coleman. The conference was dedicated to Coleman, who has been in declining health in recent years and was able to attend only the opening-night reception.

“Sidney is a theorist’s theorist,” said Weinberg, now at the University of Texas, who shared the 1979 Nobel Prize in Physics with Glashow and Abdus Salam. “He has not been so much concerned with accounting for the latest data from experiments as with understanding deeply what our theories really mean. I can say I learned more about physics from Sidney than from anyone else. I also learned more good jokes from him than from anyone else.”

That sense of humor helped Coleman become an admired teacher as well as a renowned physicist. In his textbooks, he is known to drop wry comments amid scientific language and complicated equations. In one instance, proponents of a certain theory were characterized as “like the man who settled in Casablanca for the waters. They have been misinformed.” 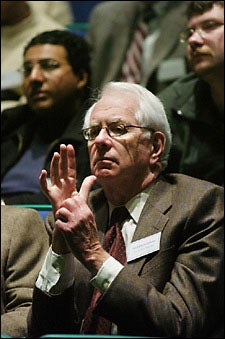 Then there is Coleman’s famous quantum field theory class.

“His legendary lectures at Harvard and at numerous summer schools inspired a whole generation of young physicists,” said Landon T. Clay Professor of Mathematics and Theoretical Science Arthur Jaffe, who organized the conference with Barbara Drauschke, publications coordinator in the physics laboratories.

One of those young physicists is Harvard Professor Nima Arkani-Hamed. “He played a vital role in explaining the most advanced subjects in the field both to students and to experts, particularly through lectures filled with marvelous physical insights,” he said.

Harvard President Lawrence H. Summers gave a welcoming speech on the first day of the gathering that was described by faculty members as funny and inspiring.

Summers spoke about how achievements in the arts or in pure science, like the ones being celebrated at the conference, will be what is remembered – above all other current events – in the centuries to come, and that great universities must support such endeavors.

As the conference unfolded, Coleman’s friend Errol Morris, who won an Academy Award for his documentary “The Fog of War,” prepared a makeshift set in the physics library with a striking green background for distinguished attendees to drop in and share “Sidney stories” and talk physics. Morris featured Coleman in a short film that was shown during the 2002 Academy Awards.

At the Loeb House reception, Coleman and his wife, Diana, had the chance to greet old colleagues and friends one by one. Then, before leaving, Coleman came into the main dining hall, and all stood to toast and cheer.