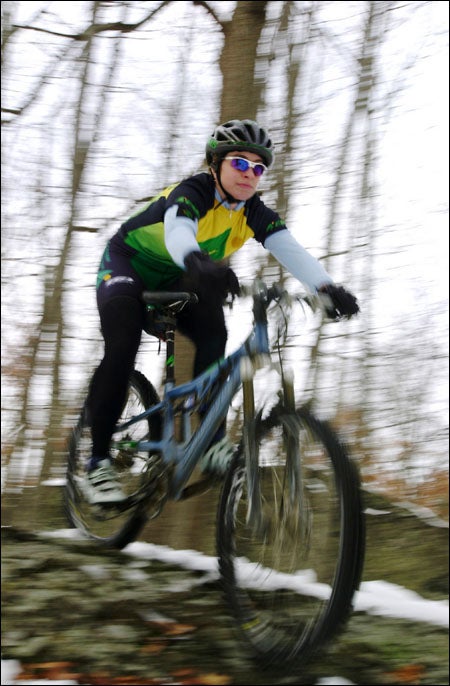 Five years ago, Jennifer Shultis was a competitive equestrienne who rarely ran, had never mountain biked, and had what she calls a “normal” fear of heights.

Now, Shultis, a staff assistant at the Kennedy School of Government, is a professional adventure racer in the elite 1 percent of sponsored racers. She travels the nation to compete with the team she leads, sponsored by outdoor retailer Eastern Mountain Sports (EMS), in races that combine map-and-compass navigation with trail running or trekking, mountain biking, paddling, and climbing or rappelling.

“I reinvented myself,” says Shultis of her transition from horse- to human-powered sports pursuits. Moving to the Boston area from the Midwest, she says, she soon realized she couldn’t afford to ride competitively. She took up running to stay in shape and quickly added the Boston Marathon and a few triathlons to her resume. At one of the latter, she met her now-teammate David Darby, who encouraged her to try adventure racing.

“Within two weeks he had me out on a mountain bike for the first time,” she says. “I did terribly, but I loved it.” She came in second in her first adventure race and, as one of relatively few women in the sport (rules mandate that each team of three or four must have one woman), grabbed the many opportunities that came her way.

Now, Shultis leads the EMS team in races that range from “sprint” distance of four hours to multiday events, such as one the team will race in Costa Rica this winter. Although she trains hard, logging about 120 miles each week on her bike and up to 35 miles of running during the racing season, she maintains that her edge is only partly physical.

“One of the reasons I’ve been successful isn’t because I’m so fast, but that I’ve had really good luck putting good teams together,” says Shultis. “The teamwork is just so important.”

With its unmarked courses winding through unknown wilderness, adventure racing appeals to Shultis’ sense of, well, adventure. “I like the fact that it’s so unpredictable, that you never know what’s going to happen,” she says. “I’ve had wild experiences where you get to rivers that should be crossable but it’s been pouring for days.”

As she strives to break into the very top echelon of adventure racing, Shultis acknowledges she’s hamstrung by outside interests that impinge upon her training time. Her sponsorship provides her team with gear and travel expenses, and prize winnings bring in additional cash, but she’s unlikely to be able to abandon her Harvard day job any time soon. She also takes two courses each semester at the Harvard Extension School and is devoted to friends and family. “They aren’t areas that I’m willing to give up,” she says.

And for now, she’s not giving up racing – or urging others to try it. “People are capable of so much more than they think they are. People don’t test their limits. You should really never stop testing the limits,” she says, adding that racing was much easier than she anticipated. “You just have to commit to it on some level – adventure racing or anything else.”