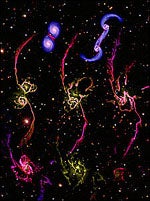 Using a new computer model of galaxy formation, researchers have shown that growing black holes release a blast of energy that fundamentally regulates galaxy evolution and black hole growth itself. The model explains for the first time observed phenomena, and promises to deliver deeper insights into our understanding of galaxy formation and the role of black holes throughout cosmic history.

Published in the Feb. 10 issue of the journal Nature, the results were generated by astrophysicists Tiziana Di Matteo of Carnegie Mellon University, Volker Springel of the Max Planck Institut fur Astrophysik in Germany, and Lars Hernquist of Harvard University.

“In recent years, scientists have begun to appreciate that the total mass of stars in today’s galaxies corresponds directly to the size of a galaxy’s black hole, but until now, no one could account for this observed relationship,” says Di Matteo, associate professor of physics at Carnegie Mellon. “Using our simulations has given us a completely new way to explore this problem.”

The key to the researchers’ breakthrough was incorporating calculations for black hole dynamics into a computational model of galaxy formation.

See a simulation or pictures of colliding galaxies

As galaxies formed in the early universe, they likely contained small black holes at their centers. In the standard scenario of galaxy formation, galaxies grow by coming together with one another through the pull of gravity. In the process, the black holes at their centers merge together and quickly grow to reach their observed masses of a billion times that of the sun; hence, they are called supermassive black holes. Also at the time of merger, the majority of stars form from available gas. Today’s galaxies and their central black holes must be the result of a series of such events.

“We’ve discovered that the energy released by black holes during a quasar phase powers a strong wind that prevents material from falling into the black hole,” Springel says. “This process inhibits further black hole growth and shuts off the quasar, just as star formation stops inside a galaxy. As a result, the black hole mass and the mass of stars in a galaxy are closely linked. Our results also explain for the first time why the quasar lifetime is such a short phase compared to the life of a galaxy.”

In their simulations, Di Matteo, Springel, and Hernquist found that the black holes in small galaxies self-limit their growth more effectively than those in larger galaxies. A smaller galaxy contains smaller amounts of gas so that a small amount of energy from the black hole can quickly blow this gas away. In a large galaxy, the black hole can reach a greater size before its surrounding gas is energized enough to stop falling in. With their gas quickly spent, smaller galaxies make fewer stars. With a longer-lived pool of gas, larger galaxies make more stars. These findings match the observed relation between black hole size and the total mass of stars in galaxies.

“Our simulations demonstrate that self-regulation can quantitatively account for observed facts associated with black holes and galaxies,” says Hernquist, professor and chair of astronomy in Harvard’s Faculty of Arts and Sciences. “It provides an explanation for the origin of the quasar lifetime and should allow us to understand why quasars were more plentiful in the early universe than they are today.”

“With these computations, we now see that black holes must have an enormous impact on the way galaxies form and evolve,” Di Matteo says. “The successes obtained so far will allow us to implement these models within larger simulated universes, so that we can understand how large populations of black holes and galaxies influence each other in a cosmological context.”

The team ran its simulations using the extensive computing resources of the Center for Parallel Astrophysical Computing at the Harvard-Smithsonian Center for Astrophysics and at the Rechenzentrum der Max-Planck-Gesellschaft in Garching, Germany.