An egg full of singing puppets

With democratization comes a fierce fight for equality

By María Cristina Caballero Special to the Harvard News Office

Nawal was 9 when she repeated something she had heard at home to some classmates on the playground. Iran wasn’t so bad, she said, which prompted a boy to run to the teacher. Soon Iraqi government agents arrived to interrogate Nawal. Then she – and her whole family – just disappeared. “We all knew that they were killed,” said Zainab Al-Suwaij, remembering her grade school friend. “The lesson for us was to remain silent, and not to challenge the regime,” which at that time was at war with Iran.

Now 33, Al-Suwaij grew up under the harsh rule of Saddam Hussein, took up arms against the Iraqi ruler, and today is working to bring democracy – and especially women’s rights – to a country that is struggling both with Hussein’s legacy and an age-old authoritarian tradition. With her friend and comrade Ala Talabani, Al-Suwaij brought peace-building lessons from Iraq to the annual Women Waging Peace colloquium at Harvard’s Kennedy School of Government this past week.

For the past five years, Women Waging Peace (WWP) has brought a group of women leaders from the world’s war-torn regions to Harvard to share their stories and to learn about organizing for peace. WWP is based on the belief of Swanee Hunt, director of the Kennedy School’s Women and Public Policy Program, that women’s voices are essential to prevent conflicts and end violence.

With Iraq very much in the news, Al-Suwaij and Talabani’s views have been in demand. Both women have met with President Bush at the White House, and Al-Suwaij spoke to the Republican National Convention. Though they have taken different routes to become outspoken activists, they agree that this is a crucial moment for women in Iraq. A January election, they say, will decide whether women will really become equal citizens or lose their voices.

Before becoming a peace-wager, Al-Suwaij was a warrior – and has the bullet scar on her cheek to prove it. When her classmates were forced to march holding pictures of Hussein, Al-Suwaij often sneaked away. At 20, during the 1991 Gulf War, she heeded the words of the first President Bush, who broadcast messages on Voice of America urging the Iraqi people to rebel against Hussein, promising that U.S. forces would support them. As an armed fighter, she helped to liberate provinces and to open the gates of a prison where there was a human meat grinder for those who didn’t confess. The promised support from the United States never arrived, and the battle-scarred veteran went into exile in the United States.

Following the tragedies of Sept. 11 Al-Suwaij created the American Islamic Congress with the goal of promoting moderation and tolerance within and outside the Islamic community. After the American occupation of Iraq she has also spent 14 months there working to develop projects focused on improving the educational system – her schools for dropouts have a 97 percent rate of success – and empowering Iraqi women.

Al-Suwaij credits her drive to organize for democracy to lessons learned from her grandfather, a Shiite ayatollah. “My family is shocked. I am the first woman in my family who doesn’t just stay home,” she said. “My grandmother didn’t believe it when she saw my photo with Bush in the Iraqi papers.”

During the WWP colloquium, Al-Suwaij enthusiastically discussed her new projects with Talabani, another Iraqi exile. A civil engineer, Talabani was fired from her job for refusing to join Hussein’s Baath party about 15 years ago. She lost her position as a professor for the same reason. After joining the Patriotic Union of Kurdistan, she was detained and interrogated by the Iraqi security service. In 1996, she went into exile in England and helped to organize the Women’s Union of Kurdistan. Talabani eventually returned to work in the semi-autonomous northern Iraq region of Kurdistan, opening training centers and visiting both rural areas and urban neighborhoods to encourage women to develop their potential.

Al-Suwaij and Talabani collaborated long before they met, launching an initiative called Women for a Free Iraq. They only met personally after the American occupation. Recognizing each other in Baghdad, they simultaneously said each other’s names, smiled, and hugged. Meeting again in Cambridge, they treated each other as sisters. “Ala and I are twin souls,” Al-Suwaij said. “We have the same vision,” Talabani added. 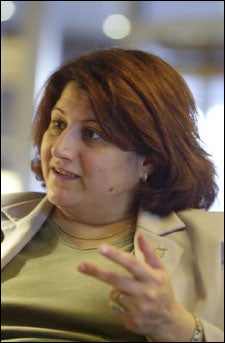 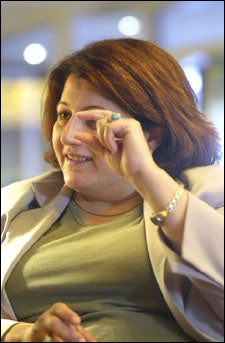 Now, that vision is focused on securing women’s rights in the new Iraq. On one level, they are fighting to recover the rights that women lost in the latter years of Hussein’s rule. Unlike many others in the region, the women of Iraq were allowed to work, vote, drive, and study in the 1970s and 1980s. But after the 1991 Gulf War, the Iraqi dictator – in an effort to appease the majority Shiite population that he had repressed so brutally – took a harder line on women, depriving them of free choice in marriage and the freedom to travel without being accompanied by a male relative. After Hussein’s overthrow, hard-liners have worked to restrict women’s rights. When Talabani met with members of the Iraqi Governing Council, some of the men refused to shake hands because she is a woman.

Talabani and Al-Suwaij labored hard to write into Iraq’s interim constitution that men and women are equal. Working at the grassroots level, they motivated women to gather more than 50,000 signatures calling for 40 percent of positions in national and local government to be set aside for women. They insistently lobbied members of the Governing Council and encouraged Raja Al Khuzai, a woman member of the Governing Council who had previously said she felt quite ignored by her male colleagues, to press the issue. Because of the increasing pressure – and against a lot of opposition – a 25 percent quota for women was approved. Thanks to this success, today there are six Iraqi women cabinet ministers, including one dedicated to women’s affairs. The interim constitution also guarantees at least a quarter of the 275 seats in Iraq’s new National Assembly to women.

Al-Suwaij and Talabani also worked hard to gather 45,000 women’s signatures on a petition to stop an attempt to restrict women’s rights by religious leaders on the Governing Council who attempted to impose Sharia family law in the form of “Resolution 137.” Al-Suwaij said Resolution 137 would not have allowed women to leave their houses without asking for permission from their husbands, while Talabani pointed out that the resolution would have allowed men to marry several women without going to a court. Therefore, she explained, the marriages would not have been registered and, as a consequence, the first wife could easily have lost custody of her children. Women would have also lost the right to receive inheritance. Talabani even met with Paul Bremer, former U.S. representative in Iraq, to ask him to use his influence against the proposal. “We would have been in a worse situation than the women of Afghanistan before the American occupation,” Al-Suwaij said. Resolution 137 was defeated this past March.

Such victories bring with them significant risks, for women in general and Talabani and Al-Suwaij in particular. Iraqi women are often victims of rape and harassment, and a number of women have been killed. In March, gunmen killed two of the women who helped launch the Fatima al-Zahra Center for Women’s Rights. Talabani and Al-Suwaij feel the risks are worth facing.

Al-Suwaij cut short her participation in the Women Waging Peace colloquium to fly to Iraq to begin a new project dedicated to teaching 150 women from different Iraqi regions about democracy. “I call it Democracy 101,” she said. The U.S. State Department in March announced that $10 million would be dedicated to promoting the participation of women in the January election, but the funds were only allocated in September. Al-Suwaij’s project will be financed with part of those funds, though she noted that three months is a very short time in which to develop a project.

Al-Suwaij is concerned about her personal security in Iraq, but said, “I always think whenever is going to be my day it will be my day. It won’t be a day before or later.”

Talabani, too, defies the risks, continuing to train many women about leadership, about how to set up a business, how to organize groups to promote their own development, and how to write proposals to get financial resources from international foundations. “We, the women, are building bridges among cultural, ethnic, and religious divides,” she said. Talabani is directing a Center for the Empowerment of Women in Suliaymania; she has recently trained 55 women in political leadership, hoping that some of them will decide to launch their candidacies for the January Iraqi elections.

The women of Iraq have a long way to go before Iraqi men treat them as political or social equals, Al-Suwaij and Talabani said. They believe the fate of women’s rights will rest significantly on the outcome of the upcoming Iraqi election, when the issue of “family status” is sure to re-emerge.

“In the January election, the candidates will be elected based upon religious orientation,” Talabani said. “This will be a party-based election, not based upon their points of view on issues or projects.” She pointed out that Al-Hakim, the man behind Resolution 137, has launched his presidential candidacy and she strongly hopes he doesn’t win.

Al-Suwaij and Talabani both have political ambitions of their own; both would like to be president of a democratic Iraq. “Maybe I will run for congress first,” said Al-Suwaij. Talabani also plans to wait a little to launch her own candidacy because she wants to run on a platform of ideas and not the religious orientation of a party. Talabani wants to represent the ideals of Iraqi women: 55 of every 100 citizens. “We are already the most organized sector of the civil society in our country,” she pointed out.

Eventually, both women said, the combined voices of women clamoring for peace will have to be heard.

María Cristina Caballero, a freelance writer and journalist, is a member of Women Waging Peace and a fellow at Harvard University’s Center for Public Leadership at the Kennedy School of Government. You can reach her at maria_cristina_caballero@ksg.harvard.edu.