John Mack to be honored

He’s ultimately in charge of the mental health and well-being of a population that endures enormous stress, doesn’t sleep enough, and is at an age when mental illness often surfaces for the first time. This group also must negotiate the tricky transition from adolescence to adulthood, will probably experience new or deeper sexual relationships, must face academic challenges greater than any they’ve encountered, and will likely experiment with alcohol consumption or perhaps other illegal substances.

In short, they’re college and graduate students who, for all their youthful resiliency, are demanding increasingly sophisticated mental health services from their university – at Harvard and around the nation.

Several months into his new position, created at the recommendation of the Student Mental Health Task Force convened in December 2003 by Provost Steven E. Hyman and Dean of the College Benedict Gross, Barreira is busily optimistic about the ways he and his colleagues are responding to the community’s needs. Top on his agenda is linking the University’s disparate services dealing with mental health, which have existed in their own tubs and fiefdoms, to provide seamless care for those in need.

“We’ll take any portal of entry we can for a student who’s in trouble,” adds Harvard University Health Services (HUHS) Director David Rosenthal.

Barreira’s position provides a new structure for the relationship between the Bureau of Study Counsel (BSC) and HUHS mental health services, which were previously distinct but now both report to his office. Working with HUHS Chief of Mental Health Services Richard Kadison and BSC Acting Director Suzanne Renna, he’s facilitating better communication between the groups with joint staff meetings and shared computer systems.

“I am fortunate to have the experience and expertise of these two professionals supporting these efforts,” he says. “We’re thinking about what functions are distinctive and what functions overlap” between the Bureau and HUHS and about how to identify students who are seeking help in both facilities.

While the Bureau will retain its core function of providing academic assistance, Barreira and others recognize that academic struggles and mental health issues are often closely linked. Further, for many students, the Bureau is a more comfortable place to seek help than the clinical setting of HUHS.

“What’s important is that students get somewhere where they feel most comfortable,” says Barreira. “Then we can make sure they get to the right people.”

The Student Mental Health Task Force had expressed concerns about the appropriateness of the Bureau’s homey Linden Street facility for providing accredited mental health care, but Barreira reports that only a few modifications appear to be necessary for the building to be accredited.

Reaching out beyond the clinic

Beyond mental health facilities staffed by trained clinicians, Barreira and HUHS have tapped some of the less formal ways to reach out to students heading for trouble. Coaches, faculty members, student leaders, and administrators can all play a role in caring for the community, he says. 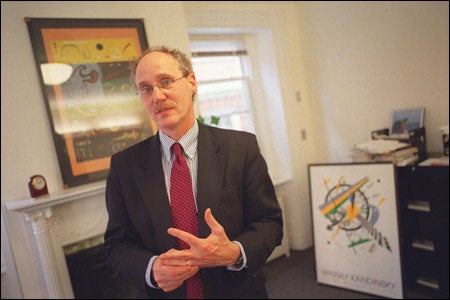 A pilot program has designated “wellness resource tutors” in Currier, Adams, and Dunster Houses; these tutors are charged with organizing activities to help students and tutors deal with issues ranging from stress and relaxation to procrastination, relationships, active listening, and depression.

“We’re going to use this year to see what works,” Barreira says. “The hope is that if it is effective, other Houses will develop a similar role among their tutors.”

Just months after being named to this new position, Barreira (and other top University administrators) received the report from the Committee to Address Alcohol and Health at Harvard, moving one of the community’s most pressing health concerns to the top of his to-do list.

Excessive or dangerous drinking brings potential harm not only to an individual via alcohol poisoning or even death, but can lead to broader-based problems like rape and sexual assault, violence, and accidents. Barreira cites a recent survey that found that 40 percent of Harvard students reported doing something while drinking they later regretted.

A thorny issue that’s hardly unique to Harvard, dangerous drinking demands a careful community response, says Barreira, rather than a series of top-down mandates. Building consensus among students, as well as their coaches, tutors, and faculty, about the role and dangers of excessive drinking will be the first step.

“It doesn’t do any good to make it an ‘us versus them’ dynamic,” he says. “Students have to be active participants.”

In fact, Barreira takes a communitywide approach to his entire mental health portfolio, whether reaching out to students in need, curbing dangerous drinking, or providing effective counseling or psychiatric help.

“My role is not only providing better services, but also to really look at how to build a community that feels receptive and supportive to all members of the Harvard community,” he says.