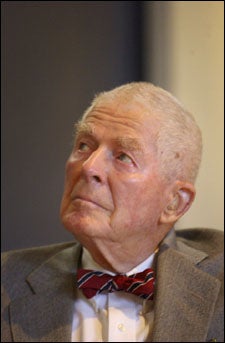 When friends, colleagues, and family gathered in the Memorial Church Friday (Oct. 8) to celebrate the life of Archibald Cox ’34, Harvard Law School professor emeritus, they honored the memory of a great teacher, courageous public servant, legendary Watergate figure, and devoted husband and father.

In all these roles, said speaker after speaker, Cox’s integrity and love of the law shone through.

“Archie Cox’s life stands for the primacy of the role of law,” said Dean of Harvard Law School (HLS) Elena Kagan in her welcoming remarks. Kagan, the only speaker who didn’t know Cox, said she was nonetheless touched by his influence. “He taught a nation that it would be strong only to the extent … that law would be respected above all.”

“In all matters, the question for Archie was clear: What is the right thing to do?” said Professor Emeritus Clark Byse, in remarks delivered in his absence by Fairchild Professor of Law Andrew Kaufman.

Cox, who died in May 2004 at age 92, joined the HLS faculty as a visiting lecturer in 1945 and became a tenured professor the following year. An expert in labor and constitutional law, he interrupted his teaching duties several times throughout his long career to perform public service. Cox is best remembered for the five months he served as Watergate special prosecutor, which culminated in his firing by President Richard M. Nixon in 1972’s “Saturday Night Massacre.”

Yet the service, officiated by the Rev. Professor Peter J. Gomes, largely avoided a biographical accounting of Cox’s life in favor of eloquent remembrances by former colleagues and by his son, Archibald Cox Jr.

Cox, who always considered his government work second to his teaching, made decisions based on “what the law required, not what the president wanted,” said Ames Professor of Law Philip Heymann.

His integrity permeated all areas of his life and work, said Professor of Law and former Harvard President Derek Bok. “For those who knew him, Watergate was not an isolated act of moral courage, only the most visible,” he said.

Bok, who first met Cox as his HLS professor, added warmth to the picture of the legal scholar with stories about his life as an avid gardener, hay cutter, and wood splitter. James Doyle, Cox’s press officer during Watergate, recalled a modest man who preferred to lunch at Harvard Square’s late Wursthaus rather than the Faculty Club.

Archibald Cox Jr. gave a glimpse of his father’s home life. “To us, he was Dad, or perhaps Father,” said Cox. “That was, and is, much more important than what he was publicly.” Cox’s other two children, Sarah and Phyllis, also attended the service.

Although Cox’s wife of 67 years, Phyllis, was absent due to illness, her impact on her husband’s life was not. Several recalled her as Cox’s partner in every sense of the word, the support system that maintained his day-to-day life. “You are me. Without you, there would be no me,” Cox wrote to her in a letter later published in his biography by Ken Gormley.

Anthony Lewis, the former New York Times journalist who met Cox when covering Watergate, recalled his emotions when he saw a picture of Cox recently. “We need Archibald Cox today,” he said. “In Archie’s absence, the rest of us will have to apply the lesson of his life: the commitment to duty and the unflinching search for truth.”