(June 11), brought up some interesting issues regarding the role of science in society, the importance of scientific literacy, and the obstacles facing women scientists. But it would have made an even more interesting debate.

It would have been fascinating to hear novelist and poet Margaret Atwood respond to Tilghman’s feelings of “dismay” on reading Atwood’s latest novel, “Oryx and Crake.”

One could not help wondering whether such a debate had already taken place. Tilghman and Atwood both received honorary degrees at Harvard’s Commencement the previous day, and there must have been opportunities for the two women to discuss their conflicting points of view.

Tilghman, a groundbreaking biochemist and the first female president of Princeton University, said that she is an eager and enthusiastic reader of Atwood’s fiction, but that she found her fellow Canadian’s latest effort “painful reading” because of its unsympathetic portrayal of scientists.

In the novel, a dystopian view of the future, a scientist named Crake has all but destroyed the human race through genetic experiments gone awry. But if that isn’t enough, said Tilghman, Atwood consistently dwells on the negative characteristics of scientists in general – “their arrogance, their venality, their elitism, their greed. At one point in the book the motivations of scientists working on cures for terrible diseases are called into question by one of the characters who suspects that the scientists have first created the disease in order to develop a market for its treatment – and yield huge profits for the inventor.”

As a scientist, Tilghman has been motivated by very different impulses, namely, 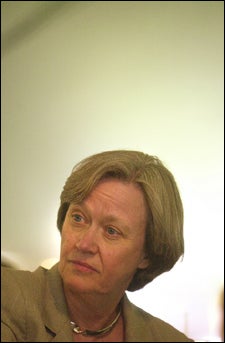 the belief “that working to improve the quality of life through scientific discovery is one of life’s great callings.”

Tilghman’s purpose was not to take Atwood to task for slandering scientists but to explore the reasons scientists are so often treated with such suspicion. To some degree, it has always been the scientist’s lot to contribute to the unease of humankind, she said.

“From Copernicus banishing Earth from the center of the universe, to Darwin making monkeys of our ancestors, to Einstein’s weird warping of time and space, the progress of science has always threatened our sense of security in the natural order of things.”

But in recent years, the pace of scientific discovery has become even more rapid, and the public is less able to keep up with it or to understand its implications. Tilghman, who participated in cloning the first mammalian gene and has been involved in the planning of the Human Genome Project, admitted that much of the public’s fear and confusion has resulted from breakthroughs in the biological sciences.

“My own field has contributed mightily to that unease in recent years by raising the possibilities of genetic enhancement for greater intelligence or bigger lips, reproductive cloning of Michael Jordan or Albert Einstein (the two most commonly named people who should be cloned), and organ farms for tired bodies.”

What can be done to make the public less innately suspicious of science, less apt to jump to paranoid conclusions about what scientific researchers are concocting in their laboratories? Tilghman’s recommendation is to make sure the public is engaged in debates about scientific discoveries and their implications for society. The first step is to explain those discoveries clearly and honestly.

“When a new discovery raises important questions about the future, scientists have a responsibility to ensure that the public debate is based on scientific knowledge, instead of prejudice or ignorance, and to explain the science in clear language that is accessible to a lay audience.”

The second step is to recognize that scientists are not the only ones with a stake in these debates.

“Scientists have no special claim on wisdom once we leave the scientific arena and come face to face with moral and social questions about the nature of the human condition. The answers cannot and should not come from scientists alone, but grow out of discussion among lawyers, ethicists, historians, social scientists, philosophers, and scientists.”

Another reason Tilghman was troubled by Atwood’s dystopian vision of the future was because it coincides with some troubling shifts in the numbers of students choosing to study science and to go on to scientific careers.

A decline in the numbers of American male students entering graduate school in science and engineering has been compensated for by an increase in the numbers of female and foreign students. The problem, however, shows up in the number of women entering science as a career. Last year, 45 percent of the Ph.D.s in molecular biology were awarded to women, but the percentage of women in the applicant pool for junior faculty positions at top schools was only 25 percent.

“This isn’t a leaky pipeline – this is a gush. How can we understand this precipitous drop after graduate school, which also occurs in other sciences?”

The answer, according to Tilghman, is that women scientists must deal with the issue of balancing work and family while men are largely exempt. A recent survey found that 21 percent of women scientists saw the work/family issue as their major career obstacle, compared with only 2.8 percent of men.

Tilghman said that creating a society in which women are able to realize their aspirations in a way that is compatible with raising children and having meaningful family lives is a campaign of the feminist revolution that remains to be won. She urged the Radcliffe Institute to devote its resources to finding a solution to this problem.

“There is no silver bullet. It will take some deep and creative thinking to accomplish the second half of the revolution. But if the Institute is looking to make a lasting contribution to the betterment of our society, it would be hard-pressed to identify a public policy issue that affects more individuals, or where there is as much at stake for both women and men.”