How to exploit Cape Town’s Knowledge

“I got the name Knowledge from my mother,” says South African Knowledge Rajohane “Raji” Matshedisho. “One reason was because it was a unique name, and the other is that she always wanted me to be one of those clever kids. Those are the two reasons she gave me.”

Matshedisho’s mother got her wish. One of only three students chosen for a 2001 Spencer Foundation grant to conduct research in education, the University of Cape Town doctoral candidate spent the spring semester at Harvard pursuing a topic on which only he and one other scholar in his country (Colleen Howell of the University of the Western Cape) are concentrating: higher-education students with disabilities. “I am comparing South Africa to the U.S. regarding laws, services, accommodation, disability culture, everything,” he says. “The differences are quite pronounced even though the mission is the same.”

In South Africa, “it is no exaggeration to say that people with disabilities are 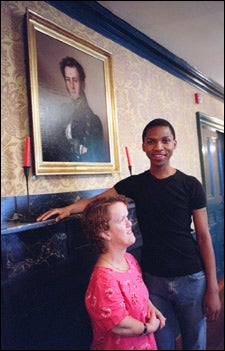 About his mentor, Disabilities Coordinator Marie Trottier, Matshedisho says, ‘She was almost like a mother.’ invisible.” There, to find a school for disabled students, Matshedisho had to travel far from the city center. He found students of all developmental and skill levels together – whether they were blind or epileptic, mentally retarded or autistic. “They are isolated not only socially,” he points out, “but physically as well. And the schools they go to don’t prepare them to pursue higher education; they just learn handcrafts. The ones who make it to college are the standouts, and those whose disabilities are not considered severe. People diagnose them just by looking at them, and they think, ‘Well, OK, you are not worth higher education.'”

It is an attitude well known to Marie Trottier, who has been Harvard’s disability coordinator and disability compliance officer for 15 years and was Matshedisho’s mentor for the project. As she has traveled around the world she’s seen on a personal level what she already knew intellectually: “The United States is incredibly advanced,” she says. “In many countries, people with disabilities are kept at home or in some sort of school or institution. They have not been mainstreamed the way Americans have been.”

Matshedisho puts it more starkly. “In South Africa,” he says, “people with disabilities are sort of outcasts. Children make fun of them.” Matshedisho, who is able-bodied, got interested in the topic simply because he noticed a gap in higher-education access. “It was all about women or black students,” he says. “As part of my studies it was my turn to present a paper one month, so I said, ‘Let me just fill the gap for that month.'” But once he began his research and saw how great the need was, he was hooked. “I realized there was so much to learn as South Africa is beginning its inclusive education process and to protect the rights of disabled South Africans.”

Another realization that took hold, once he started thinking about the topic: “I never had a friend with a disability,” he says, “either from childhood or in my adulthood.”

Until now, that is. Trottier, who has achondroplasia, or dwarfism, has more than adequately filled the role of friend since Matshedisho arrived in this country. “When I came here,” he says, “I was expecting people who are aloof. We know Americans to be very distant, and being at Harvard actually made the problem worse. I had the impression I was going to meet snobbish people. But when I got to the airport and met Marie and her assistant, Erica Schmitt, it was ‘Hi, hi, hi!’ and after just a few steps, Marie was cracking jokes with me. I could tell she was not just breaking ice, or trying to make me feel at ease. These were people who were not uptight, who were just enjoying themselves, and it has been that way all semester.”

Academically, saying the name “Marie Trottier” opened doors for Matshedisho like an abracadabra. “When you start a social research method,” he notes, “the problem is gatekeepers. It might take weeks or months to finally have somebody say, ‘OK, you can interview these people.’ But Marie is so popular, and so respected in her work, that once I told her who I wanted to talk to, I had 11 interviews in seven days. For me that was a record.”

Trottier not only has guided Matshedisho academically, but has also helped him with University bureaucracy and clued him in to alien social customs, such as standing to the right if you don’t want to walk up an escalator, and whether a potluck dinner is the same as a South African “bring-and-share” (it is). She has introduced him to American traditions like Easter Sunday dinner, and even reassured him that his dorm room was safe when “termite season” ads started appearing on his television. She checked his itinerary to make sure he’d be safe on a weekend trip to New York; helped him file his insurance claims after a brief stay at the hospital; and welcomed him into her family, which includes husband, Allan Macurdy, who teaches disability law at Boston University, and Cavalier King Charles Spaniel Lady Rose. “She was almost like a mother to me,” Matshedisho says with a broad smile.

The affection clearly goes both ways. “So much of my life professionally is what I call react and respond,” says Trottier, “so to have the intellectual stimulation of being around a young man so passionate about what he’s doing, and coming to America with his eyes wide open, has been incredibly exciting. I’m so proud of him.”