Six men and three women will receive honorary degrees in Harvard’s 353rd Commencement Exercises this morning, including Kofi Annan, who will speak at the Commencement Afternoon Exercises

Distinctive spiral grooves carved on ornamental jade rings used in Chinese burial rites some 2,500 years ago appear to have been created with a highly precise machine, a Harvard University graduate student reports in the June 11 issue of the journal Science.

Peter J. Lu also suggests a basic mechanical design that could have been used to create the etchings in question, a combination of a turntable and a stylus that moved in a concerted fashion. Such a device, which uses technology that existed in some form in 550 B.C., represents the earliest compound machine known to interconvert two different kinds of motion precisely. It would also imply greater mechanical sophistication than had previously been assumed for ancient China’s Spring and Autumn period, which lasted from 771 to 475 B.C.

“Most of the carving done on jade or bronze objects during this period of Chinese history is clearly irregular enough to have been hand-drawn,” says Lu, a graduate student in physics with a penchant for art history and ancient China. “The spiral grooves on these jade burial rings, though, are highly precise and consistent, and almost certainly must have been created using a machine that linked rotational and linear motion.”

When the rings were brought to his attention by Jenny So, a professor at the Chinese University of Hong Kong, during a visit to examine jade artifacts at the Smithsonian Institution’s Sackler/Freer Galleries of Asian Art last summer, Lu

immediately guessed the basic pattern carved on them was an Archimedean spiral (although the rings in question predate the birth of Archimedes by several centuries). While the nexus of the traced arcs was obliterated when the central circle of jade was removed to form a ring, Lu was able to determine that all of the arc segments etched on the ring shared a common geometric origin.

Challenged by So to prove his theory, Lu re-created the device that might have been used to etch the jade rings by purchasing a used phonograph above whose turntable he mounted a sliding horizontal bar. When this bar and the turntable are moved in unisonz, a sharp vertical implement attached to the bar traces out a precise Archimedean spiral.

While simple machines are known to have existed 2,500 years ago, all others identified in that era – such as potter’s wheels and the water screws used to lift water from the Nile River – used a single form of constrained motion. The machine described by Lu for carving jade rings is the earliest known compound machine to precisely link two different types of constrained motion. The rings were possibly carved by running a sharp implement over the jade material thousands of times using this simple machine to create grooves that follow the ideal mathematical equation within as little as 0.2 millimeters.

Jade rings of the type studied by Lu were commonly used in burial rituals for wealthy or powerful individuals during China’s Spring and Autumn period. The oldest such ring known to be authentic came from the tomb of a minister of the Chu culture of ancient China who died in 552 B.C. While this ring was just the size of a quarter, 27 millimeters in diameter, other jade burial rings that have been recovered are closer to the size of a bracelet. The repeating arcs etched on the rings give them an appearance roughly similar to that of a length of rope.

Lu will continue this research in Hong Kong and China this summer with the assistance of a grant from Harvard’s Asia Center. 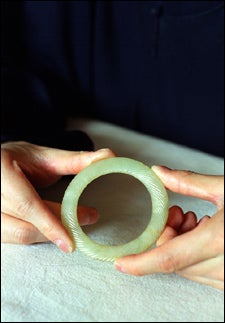