The Task Force on Science and Technology’s work was marked by the enthusiasm of Harvard’s scientific community for the new venture, as 70 proposals for new scientific projects were presented in response to the task force’s initial call for ideas.

“There is a palpable excitement about the possibility of creating a place where we can attack science in a wholly new way,” said the task force’s chair, Provost Steven Hyman.

scientific institutes in an effort to determine factors that lead to success, interviewed key scientific leaders to determine promising future paths, and solicited ideas from the broader science community at Harvard, including Harvard’s Schools and affiliated hospitals.

The hallmark of the resulting framework is flexibility. One thing that became clear, task force members wrote, is that science is moving rapidly on many fronts, making it difficult to predict precisely the shape of science decades from now.

The task force’s consultative approach bore immediate fruit. The outpouring of ideas for an Allston campus prompted task force members to change their strategy, which had been to cull the long list down to a realistic number of potential projects.

As they reviewed the list, however, it became clear that many of the proposals 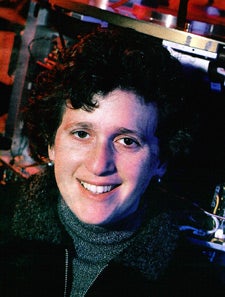 ‘I’d say the most enlightening thing was to see what’s going on in the other Schools and to do something that might integrate the University better as a result.’

were related to each other in many ways, so the task force, rather than selecting between the ideas, instead began to categorize them and consider ways that broad categories of research could be fostered by new facilities in Allston.

This work acknowledged the strength of the current research structure at Harvard, and envisioned a new science community centered around several hubs: the existing facilities in Cambridge and in Longwood, at Harvard’s teaching hospitals, and in Allston. Any new development in Allston would be designed to augment and enhance existing research, not to detract from it, compete with it, or replace it, task force members agreed.

Another critical focus would be undergraduate education. While task force members acknowledged that undergraduate education would continue to be centered in Cambridge, they also said the new facilities would provide important opportunities for undergraduates, through laboratory experience and seminars, to gain knowledge of emerging fields and to gain the interdisciplinary training that many of today’s researchers received through long experience.

The task force identified 13 research areas that would be good candidates for location in Allston. The task force emphasized that they stopped short of recommending that these efforts take place specifically in Allston, but said rather they have begun to provide a framework for continued substantive discussions.

“The traditional model of science, which is based on the individual laboratory investigator, will remain a very important part of science,” Hyman said. “But in Allston, people can work together on a shared problem or can share core equipment who are not only in different departments, but in different Schools. Allston has the potential to yield deep and useful interdisciplinary collaborations.”

The 13 areas include stem cell research, an innovative computing center to develop tools and technology for computing-intensive sciences, a flexible center for collaborative science that would provide facilities for collaborations among scientists based at physically separated labs, and bioengineering and biophysics.

The 13 areas also include the study of the origins of life, which would search for understanding about how life emerged from complex organic molecules, quantum science and technology, neuroscience, systems biology, and chemical biology. Population sciences and global health, microbial diversity and global infectious diseases, the environment, including climate change, and a clinical research center complete the list. 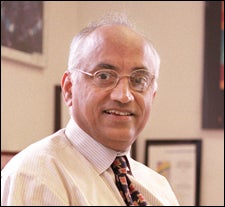 ‘The Science and Technology Task Force has made significant progress during the year. There have been some very creative proposals – and more may be expected to come. Their particular physical loci (Allston, Cambridge, or Longwood) will, I expect, evolve naturally as ideas get further vetted and analyzed.’

– Venkatesh Narayanamurti, dean of the Division of Engineering and Applied Sciences and dean of physical sciences

year,” said Venkatesh Narayanamurti, dean of the Division of Engineering and Applied Sciences (DEAS) and dean of physical sciences at the Faculty of Arts and Sciences. “There have been some very creative proposals – and more may be expected to come. Their particular physical loci (Allston, Cambridge, or Longwood) will, I expect, evolve naturally as ideas get further vetted and analyzed.”

Among the task force’s most important work, said Alyssa Goodman, professor of astronomy and member of the task force, was the effort to integrate similar research going on in different places at the University.

“I’d say the most enlightening thing was to see what’s going on in the other Schools and to do something that might integrate the University better as a result,” Goodman said.

After identifying the areas of future promise, to encourage discussion and stimulate thinking the task force created two broad categories encompassing most of the 13 areas that could prove useful in future planning efforts. Similar and complementary fields would logically benefit from facilities close to each other and perhaps designed to permit greater interaction. One category includes the Center for Collaborative Science, the Harvard Stem Cell Institute, systems biology, a bioengineering group, the visualization branch of the Institute of Innovative Computing, and a clinical facility.

The second category would include microbial science, global health, chemical biology, environmental science, other aspects of innovative computing, and a clinical facility.

The task force members said the creation of the categories was simply a planning tool and not an indication of preference.

Faculty from each of the 13 identified areas will develop more concrete proposals that would more fully explore the possibilities for collaboration. As that is progressing, further planning will continue, including a second call for ideas that will solicit ideas appropriate for any of Harvard’s science areas, not just Allston.

“I believe that the science task force, as it has begun to come to grips with the possibilities for Allston, has brought several groups of scientists from different schools together in a new, substantive way to define interdisciplinary initiatives for science for the next 5-20 years,” said task force member Christopher T. Walsh, Hamilton Kuhn Professor of Biological Chemistry and Molecular Pharmacology. “Some of these may only be possible in Allston; others can happen in existing locations with new collaborations.”

“The process of identifying Harvard’s vision for science and technology is and will be a sustained, iterative process,” the report said.