To meet Phyllis Fallon – to crunch budget numbers or process invoices with her – is to share her love of jazz, blues, and swing. Her office on the second floor 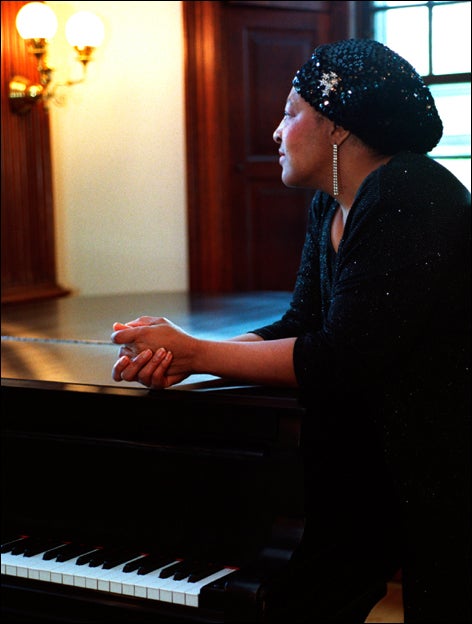 of Phillips Brooks House brings a nightclub aura to her daytime business as an accounting assistant, with jazz standards flowing out of her computer and a postcard gallery of jazz and blues pioneers decorating her bulletin board.

“I tell students I won’t give them their reimbursement checks until they can name at least one,” she says. Several well-known images of Ella Fitzgerald and Louis Armstrong ensure that everyone leaves with a check.

But Fallon is more than a jazz aficionado. On weekends and several nights a week, she channels Ella – as well as Sarah, Carmen, and Billie -as a singer for several local big bands and a jazz trio.

Fallon’s decades-long career as a singer has taken her to nightclubs, function rooms, town parks, and theaters throughout New England. “I started singing a couple of years ago, when I was seven,” she says with a grin. One of eight children (“We yelled in octaves”), her first gig was the stuff of legend: Her sisters were singing in a variety show at their church and Fallon was a last-minute replacement. She only sang back-up vocals with the Top-40-oriented variety shows because her voice “didn’t fit into the Supremes,” she says, but the church performances nonetheless led the group to success at a band competition in Dorchester.

Fallon supported herself with her music for several years, touring the region with a former child star and singing in a hard-rock band for two years. “I heard ringing in my ears for another six months,” she says.

Her stint with the “earplug band” led her to her musical home, jazz and blues. “I like the pre-’50s music,” she says. “That was when music was music, when they wrote songs that had lyrics, that meant something that you can still remember today. The music was all so varied.”

Fallon’s favorite song is whatever she is singing at the moment, and she looks to divas like Ella Fitzgerald, Sarah Vaughan, Carmen McRae, and Billie Holiday for her vocal inspiration. “People tell me all the time I sound like Billie Holiday, but I steal from all of them and put it together to get my own sound,” she says. “That’s what jazz singing is. You take what you hear and try and transform that into something you do and make it your own style.”

Even as Fallon’s summer calendar fills with weddings, events, outdoor concerts with the Tom Nutile Big Band, and Saturdays at the Colonial Inn with the Workingman’s Jazz Trio, she sees work and music flowing seamlessly together rather than competing. “They all go together,” she says, adding that her big band career grew from her day job at Digital Equipment Company; she was recruited for an employee big band. Now, her colleagues come to her gigs, the students she encounters eagerly soak up her vast knowledge of jazz standards, and Fallon maintains an easy balance of work and play. “Jazz is music that works with you rather than against you,” she says. “Music is just always a part of me, so much that it’s part of my everyday life.”