Argues for 'basic civil rights ... that go with loving someone else.'

Last Friday evening’s (April 16) presentation at Harvard Divinity School by the Rev. Dr. Mel White, the former dean of the largest gay and lesbian church in the world (the Dallas Cathedral of Hope), was billed as a lecture on “Religion, Homosexuality and Marriage: Why We Can’t Wait.” But it was really a rallying cry.

“I know fundamentalists better than you do,” White told the capacity audience in the Braun Room of Andover Hall (several attendees had to watch the talk on video in an “overflow room”), and he wasn’t kidding – before coming out publicly in 1993, White was a ghostwriter for fellow evangelicals including Billy Graham, 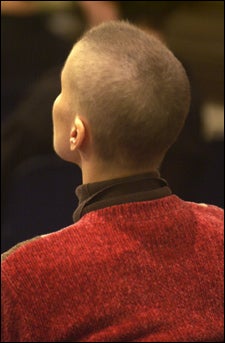 Pat Robertson, Jim Bakker, and Jerry Falwell, and he currently lives across the street from Falwell in Lynchburg, Va. “So believe me when I tell you that [the current debate around gay marriage] is not about marriage,” White said. “It’s about a fundamentalist takeover of America.” And, he added, about “denying gay, lesbian, bisexual, and transgendered [GLBT] people the basic civil rights and protections that go with loving someone else.”

White listed some of the “1,047 rights and protections” the General Accounting Office says go along with marriage, everything from Social Security, child custody, and joint adoption benefits to automatic inheritance, bereavement leave, and hospital visitation privileges. “In Lynchburg, Va., they could keep me out of the room if my partner of 23 years, Gary, was in intensive care,” White said.

“Fundamentalism has at its heart the urge to purge … and the strident and hyperbolic propaganda machine [of the religious right] is taking over on this issue,” White said. “Their voices are being heard all across the nation and we’re [too often] silent.”

“What do we do about it?” White said. “Do anything!” Among his concrete suggestions was that GLBT people and their supporters return to the churches they’ve “left in little puffs of smoke,” at least for one Sunday, and put a note in the collection tray explaining why they departed and pointing out that the policy of a particular denomination around these issues doesn’t square with true Christian teachings. “You can go back and be Southern Baptist for one hour,” he said. “Go in drag!”

White also called for people to “take to the streets” in nonviolent, creative protests. As a founder and executive director of Soulforce, for the past 10 years White has spearheaded an interfaith movement to apply the principles of “relentless nonviolent resistance” as lived and taught by Mohandas Gandhi and Martin Luther King Jr. to the struggle to stop what White calls spiritual violence against GLBT people (“soul force” is the English translation of Gandhi’s word satyagraha). White contends that religious/spiritual violence is the primary source that leads to social and political discrimination against sexual and gender minorities, as well as to suffering and even death in disproportionate numbers among these groups. He pointed to statistics showing that young gay men are seven times as likely to commit suicide than their straight peers and revealing high rates of violence against GLBT people, with transgendered people victimized in the largest numbers.

Although White stresses that all Soulforce protests are nonviolent and that they come from a place of love toward the movement’s enemies, he also looks to the example of Gandhi for how to focus his energies. “Gandhi didn’t go to the British and try to convince them of the inherent humanity of the Indian people,” White said, “Rather, he asked them, ‘When are you leaving?’ The compromises Gandhi made were about the approach to the issue but not the issue itself. I’ve learned that … I don’t have to defend my humanity anymore. Argument is a way to keep justice from happening. The argument’s over.”

Eric Gutierrez, a second-year master of divinity student at HDS, organized the event and gathered multiple sponsors, including HDS’s Student Association Executive Committee, Office of the Dean, Office of Ministerial Studies, and Office of Student Life, and Harvard’s Memorial Church. In addition to Friday evening’s lecture, White and Soulforce Director of Operations Karen Weldin led a half-day workshop on Saturday (April 17) teaching the Gandhian principles of active nonviolence, and White preached on “The Real Passion of the Christ, by the Other Mel” at the Faith and Life Forum at the Memorial Church on Sunday morning.

Gutierrez said that White repeatedly made clear that his purpose is “not to polarize, but to galvanize.” Gutierrez said it was inspiring, particularly at Harvard, to hear the message that “it’s not enough to talk about and understand the issue, it’s not purely an academic exercise, because if you are truly living in faith, you are called to do something and not just sit silently when you hear people conflating the will of God with their own social bias.”

At the same time, Gutierrez said, White gave people many options for how to act. “Not everyone needs to become an activist in the same way,” he said, “but everyone needs to witness to their faith.” One of Gutierrez’s favorite suggestions from the weekend was when White told the workshop participants, “If every gay organist in America simply refused to play one Sunday, there would be silence in Christendom!”

“We are allowing religion and spiritual teaching to marginalize and stigmatize children of God and citizens of the United States,” Gutierrez said. “This is untruth.” White repeatedly quotes Gandhi’s admonition, “It is as much our moral obligation not to cooperate with evil as it is to cooperate with good.”

“I’ve buried five young gay people now who’ve killed themselves,” White said. “If we don’t change this [law], we are marked with a badge of inferiority. We lose our self-esteem, our human dignity and our own souls. Your state’s supreme court said it [clearly and strongly], that equality itself is intrinsically important and should be respected for its own sake.”