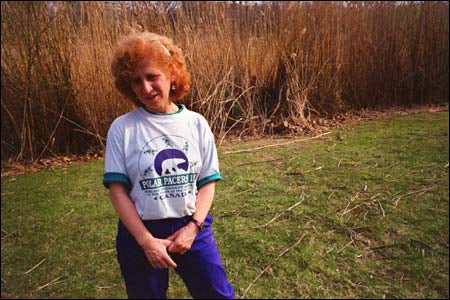 “The joke is ‘be back by sunset,'” Sarah Freeman said of her favorite long-distance race: the annual Nunavut Midnight Sun Marathon.

It’s funny, of course, because sunset in July above the Arctic Circle is weeks away.

In actuality, neither Freeman nor the other participants take weeks to complete the race, which is centered on the small Inuit community of Arctic Bay, on Baffin Island’s north coast. Freeman usually runs the event’s double marathon, which is 52.4 miles.

For Freeman, who works on two long-term longitudinal studies for the Harvard School of Public Health, one of which is under Adjunct Professor of Epidemiology Ralph Paffenbarger, a runner himself, the event provides a welcome break from the pressures and priorities of daily life.

The tundra around the route is billboard-free and the people are welcoming, she said, making the experience as much cultural as it is athletic.

Freeman ran her first ultramarathon – logging 90 miles in a 24-hour race in 1988 – at the urging of a visiting scholar, Sy Mah, who became Freeman’s running partner during his stay at Harvard. Freeman said Mah, who had run more than 500 marathons, just slowly extended the length of their runs until Freeman was running 15 miles at a time.

She remembers that first ultramarathon, around a track in Rochester, N.Y. She had given Mah a lift there so he could meet some running friends who would take him back to Ohio. Instead of providing support for the runners, as she had expected, Freeman instead started running and, 24 hours later, had covered 90 miles.

Freeman said people who run these long, long distances form a welcoming society in which she felt at home.

“That kind of gave me a whole new glimpse of running,” Freeman said. “I found all these people who are kindred spirits.”

In between races, Freeman integrated running into her life at home. She bought a rescued greyhound and named him Miles, and she works on preservation of Boston’s Emerald Necklace system of parks and greenways, trying to improve access for runners and bikers.

Despite battling knee injuries – possibly caused by the wear and tear of the miles she’s run in the past decade and a half – Freeman is planning to head north again this year for the race, held annually on Canada Day, July 1. She said she decided long ago that if she could only pick one race to run, it’d be the Midnight Sun Marathon.