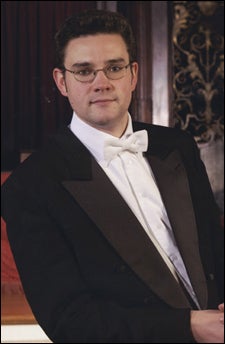 Jones, a native of Wales, holds degrees from Cambridge University and the Mannes College of Music in New York, where he graduated with a master’s degree in choral conducting and was recipient of the Felix Salzer Memorial Award. He has directed numerous choral, orchestral, and operatic performances from a wide range of repertoires, and is a frequent organ recitalist.

Jones was appointed on the recommendation of the committee established in 2003 to carry out a thorough and exhaustive search for the position. Serving on the search committee, which was administered by Matthew F. Burt, research associate in the Memorial Church, were three undergraduate members of the University Choir, as well as Thomas F. Kelly of the Music Department, Samuel L. Hayes of the Business School, and the Rev. David P. Illingworth, formerly assistant dean of Harvard College. Together, they considered an international pool of 70 highly qualified applicants. “In the end,” said Gomes, “we concluded that the talent and resources required to place the choir where it ought to be in the 21st century were to be found in the person who has served us so well these past months.”

Jones was the first organ scholar to serve in the Memorial Church in a program initiated nearly a decade ago by the previous University Organist and Choirmaster Murray Forbes Somerville. “All of us in the Memorial Church are pleased to welcome Mr. Jones back in this new and enhanced capacity; his appointment is good news for the church and for music at Harvard,” Gomes said. After notable successes in his first season, including the Christmas carol service and the recent semistaged performance of Handel’s “Solomon,” Jones looks forward to further broadening and enhancing the music program in the church. His permanent appointment takes effect on July 1.