The event was the first for the new institute, which will bring together about 100 researchers working on stem cells at Harvard schools and at seven teaching hospitals. The effort is expected to be the largest and most comprehensive of its kind yet mounted.

Natural Sciences and Howard Hughes Medical Institute investigator, referred to the event, held at the Charles Hotel, as the institute’s “birthday.” Melton and the institute’s other co-director, Professor of Medicine David Scadden, who is also director of Massachusetts General Hospital’s Center for Regenerative Medicine and Technology, outlined the basics of stem cell research for the audience.

Harvard President Lawrence H. Summers said Harvard is one of the few institutions that have the ability to step into the gap left by the federal government’s decision to ban federal funding of research on human embryonic stem cell lines created after Aug. 9, 2001.

Harvard’s ability is critical in this case, Summers said, given the promise of stem cells to cure organ or tissue failure from diseases that afflict 150 million nationally.

“We are present at the creation of something that is truly and profoundly important,” Summers said.

The institute plans to draw on expertise across the University to explore the science, politics, ethics, business, and other issues of stem cell research.

That multidisciplinary approach was evident Friday. The daylong event included talks about the ethics of stem cell research, the future business possibilities stemming from the work, and descriptions of the cutting-edge science being performed on stem cells today. 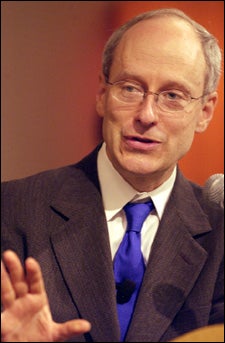 Institute planners expect to host a major symposium annually similar to Friday’s as a way to stimulate the exchange of ideas and foster a sense of community among stem cell researchers at Harvard.

In addition to the annual symposia, the institute will sponsor frequent informal gatherings around a particular scientific problem, and monthly seminars featuring outside experts. The institute’s scientific work will be conducted, at least initially, at laboratories across campus. Organizers hope to augment the institute’s initial “virtual” structure eventually with a central laboratory facility that would house critical equipment and provide workspace for researchers.

Stem cells have generated excitement among researchers from their ability to both regenerate themselves and to produce specialized tissue cells. There are two main kinds of stem cells. Adult stem cells are thought to be restricted to creating a single type of tissue cell; for example, blood stem cells produce only blood cells.

second type of cell, the human embryonic stem cell. These cells, taken from days’ old embryos called blastocysts, have the ability to form any tissue in the body. It is that potential that has researchers thinking the cells may hold the key to treating or curing diseases related to organ or issue failure, such as diabetes, Parkinson’s, Alzheimer’s, heart disease, spinal cord injury, and muscular dystrophy.

The embryos are obtained from in vitro fertilization clinics, where eggs and sperm from an infertile couple are combined in the lab and then implanted in the woman. Extra embryos are frozen during this process and, if unused, are later routinely discarded. Some, however, are donated for stem cell research.

Concerns that the destruction of human embryos for research was wrong, he said, had to be balanced by the good that could come from the research. He argued that “the ends of stem cell research are at least as weighty as the ends of infertility treatment” that created and would otherwise discard the embryos used in stem cell work.

The products of stem cell research promise to have the same kinds of impact on the economy that other watershed technological developments have generated throughout history, said Spangler Family Professor of Business Administration Debora Spar.

Once science begins to evolve into specific cures and treatments, a market stands ready to develop for stem cell-related products; there are 150 million people nationally already suffering from the effects of diseases stem cell research hopes to alleviate. The question will be where, not whether, the market exists. As history has shown, business will follow the need, whatever the regulatory environment may be, Spar said.

“The economics here are very, very basic, so basic they really can’t be denied,” said Spar.

Spar predicted that ethical issues, while important, will resolve themselves, much as they did with similar technology in the past, such as contraception and in vitro fertilization (IVF).

“Rather than the apocalypse, IVF generated both social good and considerable profits,” Spar said.