RMO to offer presentation on the ABCs of record keeping 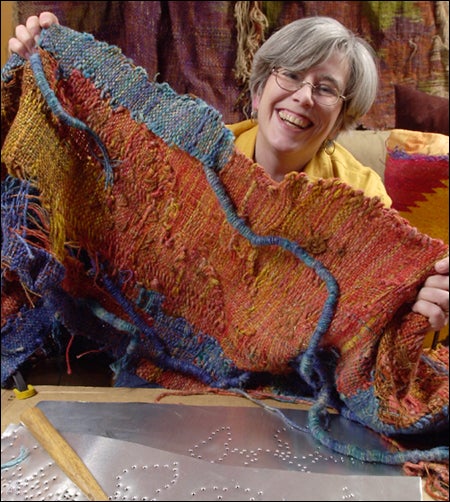 “I think I was living someone else’s life,” says Elisabeth Newman.

The person whose life she was leading resided in Boston, worked in the financial sector, and was trying to advance her career by earning a master’s degree in economics. To relax, she did knitting, quilting, and embroidery. There was something about the tactile, repetitive nature of these projects, the excitement of creating something with form and color, that she had always found extremely satisfying. She had never taken her hobby very seriously, however.

Then the real estate market collapsed in the early 1990s, and she was laid off. She began seeing a therapist to help her through the crisis – not a very good therapist, she realizes now, but sometimes a valuable insight can come from an unlikely source.

“The day I realized I was an artist was when my therapist said he thought I was using crafts as a distraction against dealing with my real problems. At first I wanted to go and kill myself. But after a while it made me realize how important these things were.”

Instead of giving up craftwork, she decided to make it the center of her life. She started by enrolling in the Massachusetts College of Art, earning her B.F.A. degree in 1999. She concentrated in fiber arts, finding inspiration in the work of African and American Indian weavers.

“I like to use old techniques that take forever to do. I find that if something goes too quickly, it doesn’t hold my attention.”

And don’t ask her to make you a sweater or a scarf. Now that she has found the confidence to consider herself an artist, Newman no longer feels it necessary to adopt a utilitarian pretext for her fiber works. They are pure self-expression, often deriving their inspiration from mythological sources, and Newman often combines different materials and techniques in an effort to give form to her vision.

A recent work, for example, combines a wood carving of a crow coasting above a woven landscape.

“I’ve always been fascinated by a bird’s-eye view, what birds see when they’re soaring above the Earth.”

Becoming an artist has entailed certain sacrifices. Newman has given up her financial career and works part time as a preservation assistant in the Harvard Fine Arts Library.

And lately, her old car has been getting a workout. Last November, she and her husband, their three dogs, and two cats, moved from Chelsea to Kittery, Maine. The change has put her in closer contact with nature, a major inspiration for her, but it means leaving the house at 5:45 a.m.