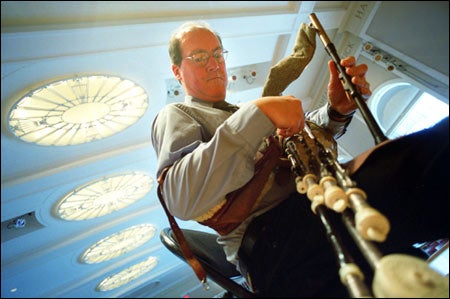 Greg Morrow buckles himself into the bellows and bag of his Scottish small pipes, furrows his brow, and begins to squeeze. As air fills the bladder and Morrow adjusts the lap-sized instrument’s three pipes, the sound is, frankly, offensive; a cross between a goose in pain and a city intersection gridlocked with taxis.

Quickly, however, the honking tones align into a bell-clear note and take flight. Morrow’s fingers dash along the chanter – the recorderlike tube on which he plays the melody – as if dancing the jig he’s playing, “The Old Wife of the Mill Dust.”

Morrow, who is assistant manager for multimedia projects for Harvard’s Faculty of Arts and Sciences, has been playing bagpipes for 43 years, since his parents introduced him to the Highland pipes as an offshoot of their own interest in Scottish country dancing. He’s followed his musical passion to Scotland, to competitions, to workshops, and to the recording studio; his current public venue is with a trio in Gloucester that plays on schooner cruises. Along the way, he’s added the Scottish small pipes, the diminutive and more limber cousin to the well-known Highland pipes, and the Irish uilleann pipes (“elbow”in Irish, from the position of the bellows between the elbow and the rib cage) to his repertoire.

Learning the latter, with its two-octave range, has proved a challenge for the piper schooled on the far more limited nine-note scale of the Highland pipes. “It’s akin to learning a whole different language,”says Morrow; more like moving from English to Spanish than from a Scottish burr to an Irish brogue. “My friends say I play the Irish pipes with a Scottish accent,”he adds, noting that he brings decades of Scottish stylings to the uilleann pipes.

Morrow acknowledges that the bagpipes aren’t universally adored. “There are some people who hate the bagpipes and there’s nothing you can do to convince them otherwise, no matter how good you are,”he says. Yet, he adds, “I can’t tell you the number of times when I’ve seen tears come to peoples’ eyes when they hear the bagpipes. There’s something very stirring and emotional about [the instrument], and I don’t know what it is.”

For Morrow, it’s the music as much as the pipes that has stirred his soul and captured his fascination for all these years. He mines the traditional repertoire – no jazz bagpipes for this piper – for tunes new and old, with names such as “Heather Island,””Lark in the Morning,”or “The Black Tip of the Devil’s Tail”evoking their creation in the pubs, kitchens, and moors of Scotland and Ireland. “It really is a remarkable music. It’s the music itself that keeps me playing,”he says. “It’s the reels, the jigs, the hornpipes. The tunes are beautiful.”