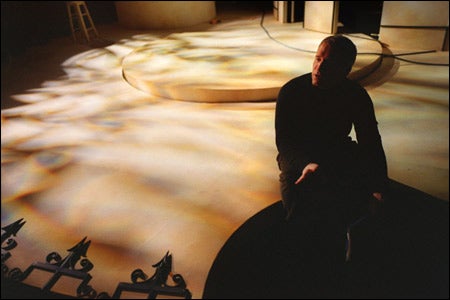 “I used to stage skits at the playground or on the sidewalk. I saw my first play when I was six or seven. It was ‘The Music Man’ at the Erie Playhouse. I got the bug pretty quickly after that. But for a while I didn’t realize directing was a profession.”

The realization came when he was a freshman at college and took a directing course.

Engel tried acting, but the analytical and critical ability that made him excel as a director caused him to give his own acting career a reluctant thumbs down.

“I was too self-conscious. Good actors think a lot about what they’re doing, but then they make all that work disappear. With me, all the homework was right out there.”

Engel earned an M.F.A. in theater at Brandeis University in the early 1980s and promptly began working as a director of local productions. But theater work, while creatively rewarding, is not often the most reliable way to earn a living. This is where a job at Harvard came in handy, first as a facilities manager of the Yard dorms, and, starting in 1994, as director of the Memorial/Lowell Complex.

Working under the Office of the Arts, Engel helps to stage musical events and other productions by students and professionals at Sanders Theatre and Lowell Hall, and directs the Harvard Box Office.

He also finds time to direct between two and four plays a year for the Lyric Stage Company, the Gloucester Stage Company, the Súgán Theater Company, the Boston Conservatory, and many others. Next year he will direct a revival of the early 20th century play “Hobson’s Choice” by British playwright Harold Brighouse at the Emerson Majestic Theatre. Engel feels his two careers complement one another.

“I play the role of an artist and the role of an administrator, but I don’t consciously turn one part of my brain on or off. Both jobs involve analyzing a situation and applying the resources you have as creatively as possible.”