Sandra Chapman reflects on relation between art and science

Surely there are easier places to make art than Antarctica. There, at the bottom of the world, acrylics crack on the page and watercolors turn to slush. En route to Antarctica by sea, pastels are often the only option; any liquid would spill as the ship rolls to such a pitch that sleeping bunks are equipped with seat belts. Gloves and layers of survival gear compromise artistic detail and precision.

Then there’s the subject matter. How much inspiration can a visual artist draw from an unending palette of white ice, blue water, and black and white penguins?

Plenty, says Sandra Chapman, a fellow at the Radcliffe Institute for Advanced Study. “The colors are just fantastic. They just blow you away,” she says. “Antarctica is just so vivid that you want to just fix something down on paper that tries to record that.”

If Antarctica is an unlikely place for artistic expression, then Chapman, whose Antarctica artwork is on exhibit at Radcliffe’s Maurine and Robert Rothschild Gallery, is an equally unlikely artist. An astrophysicist and professor at the University of Warwick in the U.K., she spent several months in Antarctica this fall and winter probing the connections and distinctions between art and science.

“The idea was to take somebody like me, who’s a scientist but a spare-time artist … to try and ask the question, what’s it like when scientists see the world, what do scientists see in the world, as opposed to artists?” she says of her Antarctica project, which was funded by a cross-disciplinary grant from Britain’s National Endowment for Science, Technology and the Arts. Although she won’t fully engage with this project until the coming summer, after her Radcliffe fellowship finishes, she’s already found surprising similarities and jarring disconnections between art and science.

“I don’t think they’re that different,” she says. Both disciplines share concepts of experimentation, exploration, discovery, and the creation of something new.

Yet Chapman notes that while art embraces the unknown, science prickles at it. The artistic process encourages wandering exploration and haphazard discovery, whereas science demands precision, results, and – too often – success that lines up neatly with expectations. “Which is bizarre, because if you’re trying to do something new, you can’t be sure that it can be done,” she says. 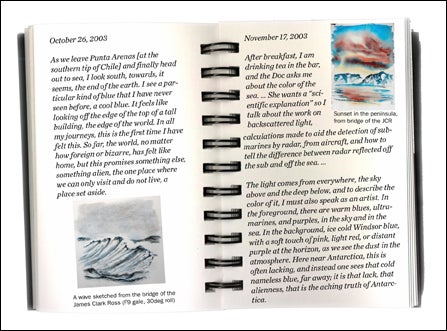 The lure of the pristine

Chapman’s trip came in the middle of her Radcliffe fellowship, when Antarctica’s relatively balmy summer temperatures hover around 10 below Celsius. She spent about six weeks at sea on a British research vessel, where she hid her identity as a scientist and adopted the persona of “the arty-farty one,” she says. For another month and a half, she was in Rothera, the British base in Antarctica.

Antarctica itself provided rich fodder for contemplating art and science, exploration, and discovery. Chapman is intrigued by the concept of pristine environment. Strict regulations aim to keep Antarctica pristine, prohibiting the leaving behind of any waste, yet the nature of scientific discovery – collecting specimens, digging out rocks – sullies the landscape, however subtly.

“It’s a really immediate way of posing this problem: how do you discover things and yet not change?” she says. It’s an issue that transcends the polar south to the whole of society, where new and better exists in constant tension with the good old days, she says.

As grateful as she is for the opportunity to turn her weekend hobby into a full-time pursuit for several months, Chapman has no intention of giving up her

day job. Back at the Radcliffe Institute, she’s at work in her primary field of complexity theory. “It’s everything from how sunspots work on the sun to how the aurora works on the earth to fusion plasma,” she explains. “I’m trying to find the mathematics in patterns of all these things.”

Although her Antarctica project and her artwork are on hold until this summer, Chapman continues to forge an interdisciplinary path. She’s using her fellowship to write a text that will make complexity theory accessible to undergraduate scientists in a variety of disciplines. She’s also doing fundamental research on solar wind turbulence with a team at the Massachusetts Institute of Technology and continuing to oversee work in her lab back at the University of Warwick.

Still, she’s hopeful that her art and her science will bump into each other beyond her Antarctica trip. “I have some ideas about … how one might represent ideas in mathematics in art,” she says, noting that some of the concepts she studies, like electromagnetic fields, have a spatial quality to them that could become visual.

From Antarctica to Cambridge to England, from pastels to plasma and art to astrophysics, Chapman thrives on this juggling of disciplines. “If you’re stuck on one problem, you can work on another. And what you’ve learned in one thing informs another,” she says. “I’ve learned how to talk to nonscientists by talking to artists, trying to present a different kind of work. You learn a lot from that. It suits me, this approach, maybe it wouldn’t suit everybody.”