In honor of the centennial of the birth of poet Pablo Neruda, the George Edward Woodberry Poetry Room will host “The Poems of Pablo Neruda” on March 17.

Neruda (1904-73), Chilean poet and diplomat, received the Nobel Prize for Literature in 1971 “for a poetry that with the action of an elemental force 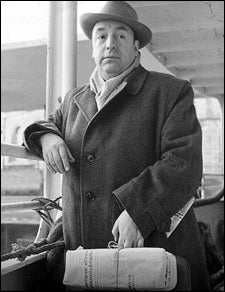 brings alive a continent’s destiny and dreams.” He is regarded as the most widely read Latin American poet – his second book of poetry, “Twenty Love Poems and a Song of Despair,” has sold over a million copies since it first appeared in 1924 – and is perhaps most well known for his work concerning political struggle in South America.

The reading will serve as a tribute to Neruda, as well as a chance to bring his poems breath and life. It will feature Ilan Stavans, editor of the new, highly acclaimed collection of Neruda’s work, “The Poetry of Pablo Neruda” (Farrar, Straus, and Giroux Inc. April 2003). In addition, the reading will include Marjorie Agosín, award-winning Chilean poet, short-story writer, human rights activist, and author of “Pablo Neruda” (Twayne Publishers, 1986); Rafael Campo, a Cuban-American poet, recipient of a Guggenheim Fellowship, and doctor of internal medicine at Harvard Medical School; and Latino poet Martín Espada, sometimes called “the Pablo Neruda of North American authors.” Other presenters include Jorie Graham, Harvard’s Boylston Professor of Rhetoric and Oratory, Pulitzer Prize-winner, and former director of the University of Iowa Writers’ Workshop; and D.A. Powell, Harvard’s Briggs-Copeland Lecturer in Poetry, and recent recipient of the Larry Levis Prize from Prairie Schooner and Boston Review’s annual poetry award.