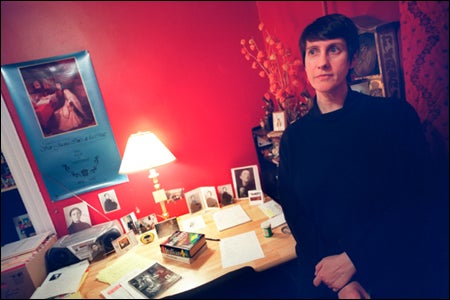 “I love uncovering forgotten people and giving them their voices back,” Baker said.

Baker, who publishes under the name Catherine Sasanov, has an unusual writing life. She goes to bed early and rises in the middle of the night, sitting alone through the small hours of the morning as she waits for the next words to arrive.

“Poetry’s very different from other types of writing. I might work for hours and come up with only a line. Other times I’m quite fortunate,” Baker said. “A lot of it is sitting and waiting, but the muse is more likely to meet you if you have a pen in your hand.”

The muse has been generous to Baker. She’s published two books of poems, “Traditions of Bread and Violence” in 1996 and “All the Blood Tethers” in 2002. “Tethers” won the Samuel French Morse Poetry Prize from Northeastern University Press. In addition to that honor, Baker has been the recipient of several grants and awards from the National Endowment for the Arts, the Rockefeller Foundation, Mexico’s National Fund for Culture and Arts, and the Sundance Institute, among others.

“Poetry is like a candle I can carry into the dark,” Baker said. “It lights up things I don’t otherwise understand or I find frightening.”

Baker has been on her own spiritual journey in recent years. Raised in a devout Catholic family, she drifted from the church, but felt it calling her back after her mother’s death in 1995.

“Sitting next to my mother’s body, she felt very much like a door, a very thin door,” Baker said. “I could almost feel her soul on the other side. She knew it all now. Whether there was something there or there was nothing there. But she couldn’t come back to tell me, and I can only write my way towards that kind of knowledge.”

Baker is working on a book-length poem cycle about St. Gemma Galgani and the Galgani family. Galgani was a pious Italian woman born in 1878 who bore the stigmata – the wounds of Christ – and who died at age 25 of tuberculosis.

Baker is fascinated by Gemma’s suffering, by the belief that her suffering could ransom souls from Purgatory, and by Gemma’s single-minded pursuit of sanctity, which at times hurt her family. She’s also fascinated that Gemma’s acceptance of suffering – and the church’s reverence for it as a bargaining chip to save souls – is so foreign today.

“If Gemma was here, would there be a place for her in this culture?” Baker asks. “Her suffering now has no currency. It’s like showing up at the border and discovering your money’s no good.”