Pool is second-largest in Harvard history

Nearly 20,000 students have applied for entrance next September to the Class of 2008, the second largest pool in Harvard’s history. “While not reaching last year’s record total of 20,987 which was swelled by different Early Action rules, both the number (19,712) and the quality of the applicants bode well for an outstanding freshman class next year,” said William R. Fitzsimmons, dean of admissions and financial aid. 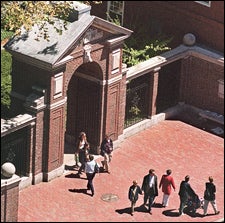 Action in order to help reverse a national trend in early admission which observers felt was not serving students well. “Many high school guidance counselors felt that early admission had become a frenzied rush to judgment for too many of their students, distorting the senior year and leading to less thoughtful college choices. We were pleased that this year’s Early Action results indicated a return to a more measured college application process in which students feel less pressure to apply before they are ready,” said Fitzsimmons.

The SAT scores of this year’s pool were strikingly similar to those of the Class of 2007. For both pools, over 56 percent scored 700 or more in the math SAT I and 49 percent reached 700 on the verbal SAT I; for SAT IIs, 10.2 percent of this year’s applicants scored an 800 on the English test compared to 9.2 percent last year, while 13.6 percent of both pools had an 800 on the math.

Proposed academic plans also resemble last year’s. Geographical distribution for both classes is similar as well, with a slightly smaller percentage of applicants this year from the mid-Atlantic and Canada, and somewhat more from abroad. While final ethnic percentages are incomplete because applications are still being read, there has been a modest increase in the percentage of minority applicants.

An important stimulant to the remarkable applicant pools of recent years is Harvard’s twice-enhanced financial aid program. “Students and their families are increasingly aware that financial need is no barrier to a Harvard education,” said Sarah C. Donahue, director of financial aid. “One of the most compelling features of our program is the flexibility offered to students receiving financial aid to customize their award package to support best their Harvard experience. In order to meet their ‘self-help’ expectation of $3,350 this year, students may choose to work 12-15 hours weekly and graduate with no loan indebtedness, use loans entirely and choose not to work, or work fewer hours and borrow only minimally. Additionally, if they have outside scholarships such as National Merit, they are able to replace their entire ‘self-help’ expectation, and eliminate any need to borrow or work. Last year, 270 students used this option,” she said.

Almost 70 percent of undergraduates receive some form of financial aid, and nearly 50 percent receive grant assistance averaging $24,000 annually (ranging from $500 to more than $35,000 depending entirely on need). Low-, moderate-, and middle-income students benefit from financial aid. The average family income of a grant recipient is $87,000 and 1,100 families with incomes greater than $100,000 receive grants, including 187 with incomes above $160,000. Harvard will distribute more than $100 million in financial aid to undergraduates next year.

Getting the word out to local high schools throughout the United States and around the world about the opportunities at Harvard is an enormous undertaking. “In addition to direct mail and travel by staff, faculty, and students, our not-so-secret weapon is the 7,000 alumni/ae volunteers who visit high schools, attend college nights, and interview applicants,” said Marlyn McGrath Lewis, director of admissions. “They are our crucial local link to students, families, and school officials. With all their work, including winter holiday and April ‘admit’ parties that are held in many locales, they further the bonds created in interviews and make a significant difference in our yield on admitted students,” she said.

“More than ever, when the competition for the world’s best students has never been greater and choosing among many fine applicants is increasingly more difficult, our alumni/ae make the critical difference through both their admissions volunteer work and their generosity in making financial aid possible,” said Fitzsimmons.

Admission selection meetings are taking place now and will conclude on March 22. Notification letters will be mailed at 12:01 a.m., April 1, and electronic notification will take place after 5 p.m. that day. Students must reply by May 1.