As part of 'Groundhog Day,' Boston highschooler gets a firsthand look at University's top job 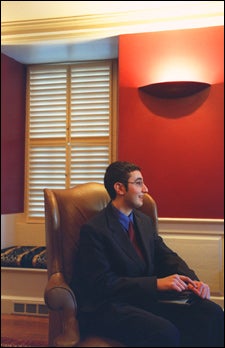 On Friday (Jan. 30), more than 750 Boston public high school students ventured out to area legislative offices, newspapers, police stations, banks, hospitals, businesses, and even Harvard to get a glimpse of a typical workday in the “real world.” Now in its ninth year, the Boston Groundhog Shadow Job Day has tightened the ties between schools and workplaces, giving students the exposure they need to consider career options and see firsthand the real-world applications of the skills they learn in school.

This year, President Lawrence H. Summers was one of 17 Harvard hosts, welcoming Boston Latin Academy senior Francis Assaf to “shadow” him as he proceeded through a typical “day in the life.”

After a walk through the Yard, Assaf met President Summers and members of his staff in Massachusetts Hall. The president and the student talked for a while about subjects ranging from sports to economics to the running of a university. Other highlights of Assaf’s day included catching a glimpse of the University’s public outreach programs when he visited the Phillips Brooks House Association, which runs community projects ranging from helping the elderly to tutoring third-graders. A little later, the highschooler crossed the river and heard Summers deliver a speech at the Business School. Assaf commented, “As my day came to a close, I collected my thoughts about this extraordinary experience. Amazingly, that one day, which felt like a whirlwind to me, was merely a typical day in the life of President Summers.”

Said Summers, “It was a great pleasure for me to get to know Frankie and learn of his experiences and aspirations. He is an impressive young man. Days like this are about opening up opportunities for Boston’s youth and we are very proud to support the city of Boston and Boston Private Industry Council in their efforts. By working together, schools, businesses, and city organizations can give Boston’s children every chance they need to succeed. They are our future and deserve every chance we can give them.”