John Dunlop honored for his accomplishments

Event celebrates the 'invention' of the Charles River 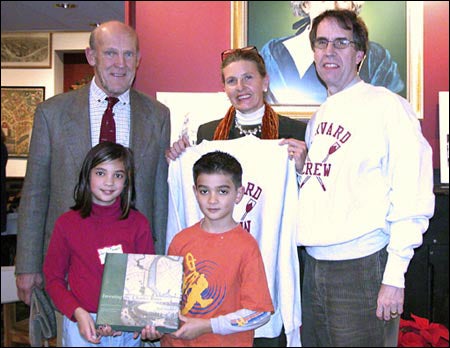 Karl Haglund (right), author of the recently released ‘Inventing the Charles River,’ a pictorial history of the Charles River Basin – known as Boston’s ‘Central Park’ – was a guest last week at an event sponsored by Harvard Planning and the Allston Initiative. Along with Renata von Tscharner (second from left), president of the Charles River Conservancy, Haglund discussed the river, its history and development, and the state of park lands. The event drew more than 50 Harvard staff, faculty, and guests interested in the river’s history and its links to Harvard, which played an important role in the transformation of the basin from industrial land to park land. ‘What is striking about the dialogue that has gone on between designers of parks and universities is that they have contributed an energy that is something that probably hardly any other city has,’ said Haglund. ‘We took back our river banks long before any other city did, and for that everyone in Boston today benefits.’ Also pictured are longtime Harvard crew coach Harry Parker (left) and his grandchildren, Noah and Anna Parker, the youngest river lovers at the event.