Process at 'end of the beginning' of making University environs 'green' 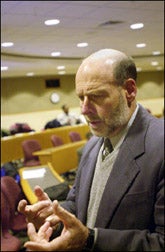 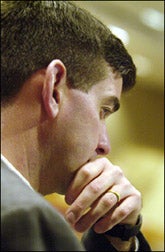 John D. Spengler, the Harvard School of Public Health’s Akira Yamaguchi Professor of Environmental Health and Human Habitation, told the 65 people in the audience that Harvard’s efforts, though gaining steam, are still in their infancy.

“I think we’re at the end of the beginning,” Spengler said.

Key to these initial efforts, he said, is the fact that the Harvard administration supports them. This allows environmentally friendly concepts to be incorporated into the early stages of project design and to be on the table when projects of many varieties are discussed.

Though efforts are still in their early stages, Harvard officials described a wide variety under way today. Construction projects like the graduate student housing at One Western Ave. incorporate environmentally friendly approaches – such as sophisticated building systems controls that have the potential to save up to 50 percent in utility costs over systems required in current building codes.

Among its other efforts, the HGCI’s partnership with the Faculty of Arts and Sciences, Harvard University Dining Services, and University Operations Services on a dormitory resource efficiency program puts student environmental representatives in the dormitories to encourage recycling, conservation, and other environmentally friendly practices. The initiative also runs a computer efficiency program that aims to change people’s behavior by encouraging them to shut off computers when the machines are not in use.

Harvard Business School, Harvard Real Estate Services, and the Allston Initiative also made presentations to task force members, who held a regular meeting after the hour-long presentations were complete.

The task force, convened last June by Boston Mayor Thomas Menino, is charged with recommending ways to promote environmentally friendly building and development in Boston so that Boston can become a “leader in green building and development.” The task force is comprised of Boston industry leaders and professionals. Several Harvard representatives are on the task force, including Spengler, Vice President for Administration Sally Zeckhauser, and Bishop William Lawrence University Professor Michael Porter.

Task force Chair Joy Conway said Thursday’s presentation by Harvard was just one of several attended by the task force. She said there are several good examples of environmentally friendly buildings in the city, such as the Genzyme building, the Conservation Law Foundation building, and the Manulife Financial building on the South Boston waterfront.

Spengler said Harvard and other universities are potentially valuable partners in the effort to improve the United States’ environmental record. The higher education industry is huge, he pointed out, with 15 million students at campuses across the country and around 8,000 construction projects under way at any one time.

In addition, Spengler said, universities are microcosms of the society around them, containing nearly all the functions and building uses that society has. The research function of colleges and universities makes them ideal places to identify and test new, environmentally friendly products and develop new strategies.

Conway called Harvard’s presentation “impressive.” She said Harvard’s efforts touch on many areas and appear to have the support of the University’s top leadership, as well as grassroots support.

“What impressed me was the scope and comprehensiveness of [Harvard’s efforts],” Conway said.