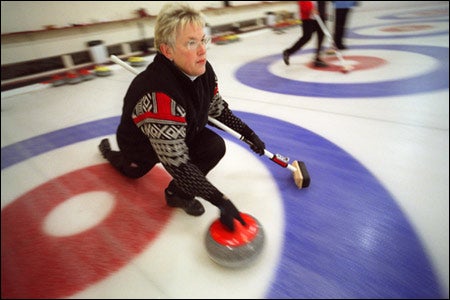 Carolyn MacLeod might be the least likely person to head a championship curling team.

After all, she hated winter sports as a kid, eschewing skating and skiing as too cold for her taste.

But 10 years ago, one try at curling and she was hooked. Over the past two seasons, her curling team has advanced through regional competitions to the national semifinals. Instead of dreading the cold weather months, she now enjoys them.

“Come October, I used to go into a winter funk,” MacLeod said. “I look forward with great anticipation to winters now.”

Many people aren’t familiar with the sport of curling, even though its roots go back hundreds of years, if not longer. The sport was well-established in Scotland by 1638, according to the United States Curling Association.

In curling, teams of four face off on a long ice sheet, sliding heavy round “stones” toward a target area at the other end. Stones can bump and knock opponents’ stones out of the target, or nudge a teammate’s stone closer. As in shuffleboard or bocci, points are awarded according to which stones are closest to the target.

The sport gets its name from the “curl,” which is the term used for both the turn players put on the handle of the stone as it is released and for the stone’s tendency to curl to one side or the other of the ice sheet as it slides along.

The stones are started on their journey in a motion called the “delivery.” The person throwing the stone starts with one foot on a block akin to those used at track events. The other foot, shod in a special shoe with a slippery Teflon bottom, slides on the ice as the person pushes off, adding their momentum – in a motion like a fencer’s lunge – to the 42-pound stone before it is released.

“It’s all about balance, like a ballerina,” MacLeod said after a recent demonstration at Broomstones, the Wayland club where she plays. “You have to find your center.”

One of the sport’s characteristics is the “sweeping” that occurs as the stone nears the target. Team members near the stone use a broom to sweep the ice ahead of the stone in an effort to make it slide further. The ice is prepared before matches by misting tiny water droplets onto the surface. The frozen droplets create an ice sheet with a pebbly texture, rather than one that is perfectly smooth, as one might find in a skating rink. Sweeping breaks down these ice pebbles ahead of the stone, making a smoother path for the stone to slide along.

MacLeod said a good sweeper can make a stone go 10 to 15 feet farther than it would without sweeping.

MacLeod, who just began a new post as director of accounting operations for the Faculty of Arts and Sciences, began curling almost by accident. She was attending her husband’s high school reunion and struck up a conversation with an old friend who was involved in the sport. Her husband, Joe, thought it would be a good idea to try curling, but Carolyn was reluctant.

She let Joe talk her into it, and after a brief clinic, got to try her hand at a real game.

“After that first game, I was hooked and have never looked back,” MacLeod said. “It’s an easy game to play, but it’s a hard game at which to excel – thus the hook that keeps me going back out on the ice for more.”