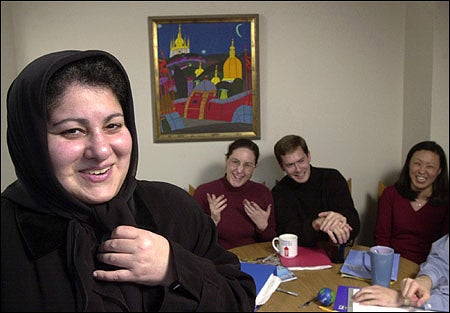 Have you heard the one about the Muslim woman who walked into the comedy club wearing a headscarf?

Then you’ve likely met Tissa Hami, coordinator of admissions and recruiting for international development programs at the Kennedy School of Government (KSG) and a budding stand-up comic with a twist – the Iranian woman performs wearing traditional Islamic hijab. And while she mines the familiar comedic territory of family and childhood and daily life, the stories take an edgy turn in her funny hands.

“It was scary growing up Iranian in this country,” she tells audiences of her childhood in Lexington, Mass. “But when other kids teased me, I threatened to take them hostage.”

Although Hami’s friends had long encouraged her to go into comedy, it took the events of Sept. 11, 2001, to push her onto the stage. With discrimination against Muslims rising and images of oppressed Muslim women flooding the media, she says, “I wanted to speak out in some way. I wanted to come out onstage dressed [like those women] but then be cracking jokes about the things that we’re all scared about.”

And so, tiptoeing the thin line between funny and offensive, Hami hit New England’s comedy circuit a year ago with jokes about airport security, stoning, and the roles of Islamic women – hardly traditional fare in the rough and rude world of comedy clubs. “I’m definitely up there with a lot of white guys telling beer and sex jokes. There have been a lot of times when I’m the only woman on the show,” she says. “But at a lot of these shows, I sense there’s a hunger for something different, that people are looking for a different voice.”

While at least one club owner met her humor with a frosty response, most of her challenges are common to all comics, whether Muslim women or beer-bragging white men. Promoting herself and snagging bookings in the ultracompetitive comedy market (Hami averages 10 performances per month) is an ongoing chore, as is coming up with new material. She scribbles germs of jokes onto Post-it notes and deposits them into a “joke bowl” on her desk for further reference. A conversation with international students at the KSG about stalking and sexual harassment, for instance, sparked a joke-to-be that revolves around the punch line, “In the old country, that’s how you get a wife.”

Although she comes from a lineage of devout Muslims, neither Hami nor her parents, who moved to Massachusetts from Iran when she was 5 years old, are particularly religious. Still, she says, her parents don’t wholly approve of her comedy career. After attending one of her shows, Hami’s mother, a dentist, assured her daughter “there’s still time for dental school.” Hami, who dabbled in law and investment banking before pursuing a master’s degree in international relations, finds that her job at the KSG lets her remain close to what she studied while allowing her time to pursue comedy.

Still, it’s a tough balance, and Hami thinks about quitting comedy regularly. “But when I’m up there, I love it. I love making the room laugh, I love surprising them, I love playing with the crowd. And I hope somehow I’m making even a small bit of difference,” she says. “I do see it as activism. I’m speaking up, I’m speaking out.”