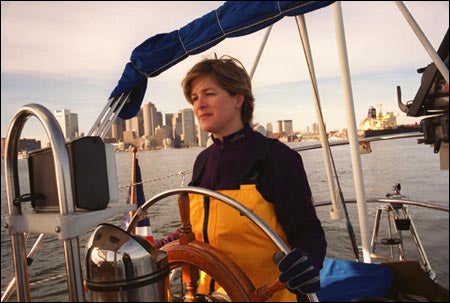 Jill Martyn has million-dollar views from her front porch. And in the summertime, every night has its social hour and every weekend its party.

When she’s on vacation, incredible night skies soar overhead as she listens to the “pouf” of whales surfacing nearby.

All from the comfort of home.

Home for Jill Martyn, a senior writer/editor in President Lawrence H. Summers’ office, is a 37-foot sailboat. It’s currently moored in a slip near the Charlestown Navy Yard. The slip gives Martyn fantastic views of Boston’s waterfront skyline from the boat’s cockpit, which she calls her front porch.

Martyn and her husband, Dean Foulis, are living their dreams. They both fell in love with sailing as adults and determined to some day sail to the Caribbean and, perhaps, across the Atlantic to the Mediterranean Sea.

Two and a half years ago, the pair took a major step toward achieving their goal, buying a 1981 sailboat. After a year of ownership, realizing it would be tough to continue to maintain both the boat and an apartment, they decided to live aboard.

They’ve been there through two winters and Martyn isn’t really looking forward to a third. The first winter was mild, she said, but by the end of last year’s cold, snowy winter, she swore she’d had enough.

“Last winter was brutal. We had no idea how cold it’d be,” Martyn said. “I think at some point in April last year, I swore I wouldn’t do this again.”

But summertime restored her faith. Months of coming home to the pier, socializing with other boat lovers, some visiting, some living aboard their own boats, helped. Their first long sail to Maine last summer, complete with whales, dolphins, and, inevitably, fog, also bolstered her enough to take another go at the coming cold months.

“It couldn’t be better in the summertime. It’s an incredibly relaxed environment,” Martyn said. “It’s like being on vacation every night, every weekend.”

Martyn said they plan on continuing their live-aboard lifestyle for a couple more years, when she hopes they’ll be ready for that Caribbean trip.

But before that comes the winter of 2004. And Martyn and Foulis are already trying out the new heating system they installed after last year’s snows.

“I don’t know that I ever planned on living on a boat in Boston Harbor,” Martyn said. “I thought I’d go someplace warm.”